Some of you may remember the saga of the Libertarian candidate for Sutton and Cheam who found himself lampooned in his local paper as a ‘basque and fishnet stockings’ cross dresser, and my efforts to persuade Mathew Knowles, editor of the offending Sutton and Guardian, that he might be a tad less belligerent and a tad more respectful of the need to give independent candidates a level playing field when it came to publishing information about them.

That effort was rewarded with a churlish and well hidden apology to Mr Cullip, predictably buried in the nether regions of Mathew Knowles paper fiefdom.

At the time, we were slightly suspicious of the journalist responsible for this outrage, Julia Kennard. We had discovered that she was a ‘fan of’ Brian Hammond, the other independent candidate who was standing under the Jury Team banner. His biography was published in the paper, even though she had still been writing it long after her ‘faux pas’ with Mr Cullip’s biography – which she alleged, proven to be untrue, had not arrived in time.

Could this have been a deliberate attempt to ridicule Mr Cullip and present her ‘facebook friend’ Mr Hammond as the only reasonable alternative to giving your vote to one of the mainstream parties? Her friends arrived in droves on this site to persuade me that nothing, absolutely nothing, could be further from the truth. All concerned were utterly honourable people.

There the matter would have rested, were it not for the curious appearance the following week of a four page spread prominently wrapped round the outside of the Sutton and Cheam Guardian as it landed on the doorstep of the worthy citizens of that constituency.

Extolling the virtues of one Brian Hammond, wealthy Chiropractor of that borough, and competingindependent candidate. 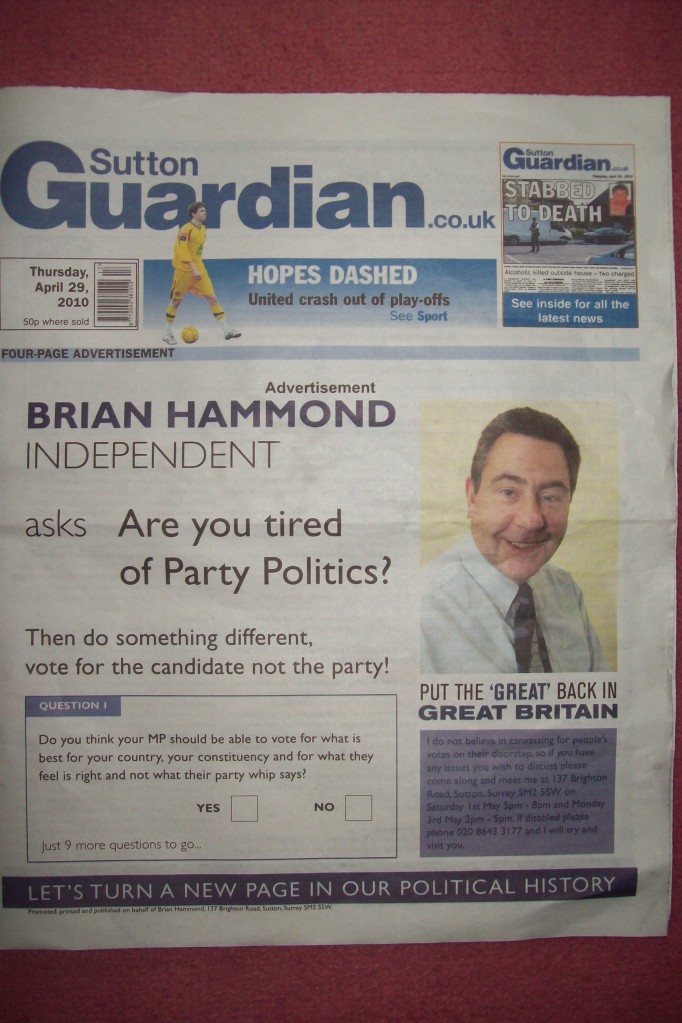 Now do feel free to write in and tell me that there is no way in which the Editor of a newspaper would be aware that his advertising department has sold four solid pages of advertising to a prominent local business man for election week as recently as one week before the election. I am sure Mr Knowles is far too busy to wonder how the profit and loss of his employers is going. No doubt he never casts a glance in that direction. Too busy chasing news, I know, I know. Surely if he had been aware he would have realised that the situation regarding his ‘faux pas’ with Mr Cullip’s biography was about to look a lot more serious. And unbalanced. And unfair. And possibly defamatory.

That four page wrap was interesting on a number of levels. Page one and two correctly held the imprint, as required by the electoral commission on all promotional literature for a candidate. It was little unusual in that it invited anyone interested in discussing politics to call at Mr Hammonds ‘clinic’, he was always available; but nothing wrong in that.

What did concern us what that anyone removing the wrap in order to enjoy their newspaper in its normal form would find that unavoidable attached to Mr Hammond’s election material was another two pages – shall we call them three and four of the wrap? These two pages were two full page advertisements for Mr Hammond’s business offering to treat everything from migraine to foot pain, with a discount voucher, and a free osteoporosis scan to boot. What tied these two events together was Mr Hammond’s statement that he didn’t ‘believe in canvassing for people’s votes on their doorstep, so if you have any issues you wish to discuss please come along and visit me at’……..his clinic address. 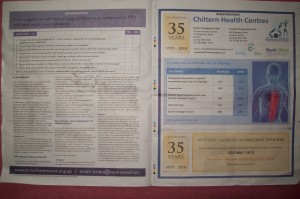 We did, naturally, enquire of the electoral commission whether this sort of advertisement tying special discounts at your place of business to an invitation to ‘talk politics’ with a campaigning candidate was strictly legal. The reply – having gone through several layers of individuals and eventually arriving at the desk of the regional officer, was bored and languid. It could well be an offence, but the onus was on us to prove that ‘someone’ had been induced to vote by this method. No advice was offered as to how one went about this process, nor even indication that there was any more to be done. The tone of voice was very much that this was his ‘final answer’.

By sheer chance though, I tripped over the very man who could advise me. Given that I live in the middle of rural France, this was a spectacular ‘chance’.

He told me that actually, we should have been advised to report the matter to the police. They would investigate, present their evidence to the crown prosecution service, and if they thought there was a more than 50% chance of gaining a conviction, they would prosecute and hand us a verdict that we could return to the electoral commission with………the electoral commission, having had all their work done by us, the police, and the crown prosecutions service would then leap into action and take all the credit for having averted an electoral disaster……..

So we have, we did. The process is underway. I have high hopes – we have a Detective Constable Danny Columbo investigating. With a name like that, at least Mr Cullip will be able to frame the reply!