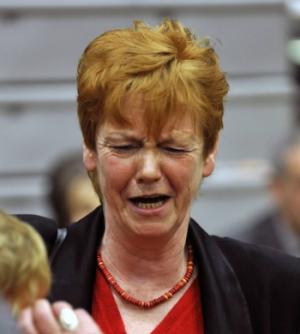 'Don't you know who I am Vera….?' -The electorate fights back!

One of the most controversially extreme feminist Labour MPs has lost her previously extremely safe seat in one of the biggest swings of the night. Liberal Democrat Ian Swales overcame a majority of over 21% forcing the extreme feminist MP Vera Baird into 2nd place.

Baird was famously arrogant, an example of which was back in January 2008 Swedish sex work Isabella Lund was invited to the British Embassy in Stockholm to discuss the Swedish sex laws (that allow prostitution but criminalise the punters) with Vernon Coaker and our Vera. This is part of what she said about the encounter:

“After half an hour Vera Baird dropped by, excused herself that she had been on the phone and then said in a very arrogant way that surely I must think that the Swedish law was good. I told her that I couldnât find one single positive side effect and I hoped that theyâd be more enlightened in England when theyâd make their decisions. Then she started to rant about rehabilitation of English sexworkers who had been arrested.” In other words she was quite happy to prosecute prostitutes in order to ‘protect’ them.

And of course there was the famous dog poo incident In 2009 when Baird was involved in an altercation with a woman at Kings Cross in relation to Baird’s dog fouling the platform. No action was taken by the British Transport Police. Baird denied any wrongdoing, in fact she asked: “Do you know who I am?” and claims the police have apologised to her following her complaints about their attitude.

But it was what she did behind the scenes that sets her apart from other MPs. In particular her contributions (i.e she pretty much wrote them) to the various sexual offences acts which are clearly anti-male. For example she was the prime mover in the Sexual Offences Act of 2003 in which the identities of accused rapists would become public knowledge whereas the victim could never be named pretty much irrespective of the outcome of the trial. She argued that if the accused must be named as it’d encourage further victims to come forward but it has been deemed to be unfair particularly to those falsely accused. Her speciality were laws that were vaguely worded in order to widen their scope at a later date without any further legislation.

She was viewed as having little or no interest in her constituency particularly with regards to the closure of the biggest local employee Corus as a result of the carbon credit scheme which she enthusiastically supported.

Now she’ll go back to become a barrister prosecuting the very laws she introduced while her erstwhile constituents can pat themselves on their backs for their will to throw her out on her ear.

So when she now asks: “Do you know who I am?” The reply should be “rejected and unemployed.”

While Gordon and his minions remain to fill the temporary power vacuum at No 10, can we be sure Vera has really packed her bags and gone?

No, she’s still Solicitor General until the hung parliament is resolved. So a careful eye should be kept on her to see what she tries to bury/get away with…

Too late in life to be of any satisfaction to me in my job, I worked out a suitable reply to the arrogant put-down question “Do you know who I am?” It’s “No I don’t, but keep talking; I’m getting a pretty good idea of what you are..”

‘So when she now asks:

Had no idea that Redcar and Vera Baird were connection. Woohoo – another authoritarian gone.

Never knew she was such a hideous harridan. But now I do … good riddance.

She does have a rather unfortunate face, doesn’t she.

PS. I’ve got a nasty suspicion that she reads this Blog. Oh Dear.

The above is not the half of it.

I was soooo happy – has anyone got a video of the count? I’d love to savour it.

And I take back all I said about the wusses in Redcar – you’re wonderful.

Sabot, it did make me wonder what she might look like when she achieved “that special moment of delight and transport” … ;o)

Not of the money shot, but one of her talking afterwards. Scroll down, there’s a video clip, appropriately, on the left.

Woman on a Raft – thank-you for the link to the earleir one. Superb. I was sitting in an election count when the news came through, and I started humming softly to myself – “bye-bye Vera Bye-bye”……..woman sitting next to me jumped to her feet outraged. “She’s a friend of mine and a very dear kind person.”
“A fiver and I won’t tell her you’re Anna Raccoon” muttered Old Holborn………

Demetrius – with a face like that? Nooooo, a radio programme beckons methinks.

Anna said: … woman sitting next to me jumped to her feet outraged.

Thank God !!!! The Hideous misandrist bitch is now out. It’s a pity that we couldn’t have got rid of the Arch man-hater Harridan Hatesmen but still . Now we need to work so that all anti- male laws are repealed so that once again men can be equal members of society.