Nikki might have thought she would be standing in the Meriden constituency in Birmingham as the official UKIP candidate. She did after all secure a seat for them in the European Parliament last year as an MEP.

However, she appears to have caused some embarrassment to the party and they are now standing another UKIP member in opposition to her.

It is on record that Ms Sinclair publicly condemned UKIPs decision to join a group in the European Parliament called the Europe of Freedom and Democracy group, and they withdrew the whip from her, although she continues to be a member of the party.

They must have been jolly embarrassed by Ms Sinclaire, for they seem to be pretty immune to embarrassment as a party.

Take their latest candidate for this ward for instance. Mr Barry Allcock.

That’s him on Twitter. Is that a little on the small side? Would you like a larger picture.

There! – is that better? I give you Mr Allcock – who is no embarrassment to UKIP apparently. 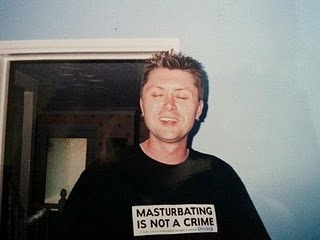 Welcome to the Libertarian fold Nikki!

I think the Libertarian party is endorsing Nikki as an independent, she hasn’t joined LPUK AFAIK. But good news anyway, I would be voting for her if I was in that constituency.

Ray,
I did say fold, rather than Party, and I did point out that she was remaining a member of UKIP……..

Yes I wasn’t correcting, just commenting! Sorry if I didn’t express myself well.

You’re welcome Ray – I make so many mistakes myself that when the first commentator says something like that I always rush back to the post to check – my merry band of sub-editors, where would I be without them? Daily they save me from utter humiliation!

In the “act” as well looking at that happy snap…

So what, he’s wearing a slightly risque T-shirt?

At least I can feel that he is more in tune with me than any number of self serving tossers wearing suits.

Focus on the issues, character and honesty rather than shite like this.

I am seriously disappointed in this blog having followed you for quite a while.

Angry Squaddie – unfortunately, that is all the information the candidate has released about himself so far – I’ll keep you updated if he tells us more….

I honestly couldn’t work out what was meant to be embarrassing, pretty weak, UKIP bloke in novelty t-shirt shocker.

Still, an ad hominem attack on him for his name and T-shirt…

Joe Public beat me to it…

A candidate with a sense of humour, can’t have that!!! Where is my pitchfork.

Do you really think he isn’t aware of the connection between name and t-shirt and that’s why he chose that particular photo?

Think about it, how much teasing must he have had his life with that name.

At least he’s proving that UKIP are not a single issue party. He’s saying that it’s not OK for the EU to spunk money up the wall but it’s OK for him to spunk up his own bedroom wall.

Shame he’s not in the constituency next door or I could vote for him.

Allcock? Wankers? This Blog following is much too clever for me. I couldn’t even come close to either of those two comments.

As regards nominative determinism, although the young gentleman appears to be just too young, it might have been more interesting for his colleagues, newsreaders and public alike if he could have made it into the current Labour Cabinet.

It show a lack of taste and would alienate the prudes, which does not matter, it would also alienate those who take matters political seriously, which does. However it would woe the X factor thick-heads which is good.

I took your manifesto,
and flushed it down the lav.