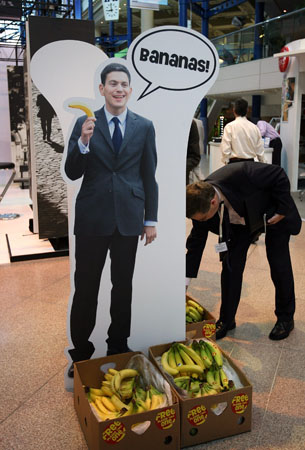 Hat Tip to the Spectator. Not so useless after all.

They have collated the figures for state spending on advertising. The unwanted government propaganda that currently fills the airwaves.

The Electoral Commission allows a party to spend £19 million – now not only does the bankrupt Labour party not have £19 million, but by the ruse of ‘government information’ Gordon has managed to avoid this cap.

In February he spent a stunning £34 million extolling the virtues of the state.

Not only does he employ five people in the public sector for every two gainfully employed in the private sector, since 1998 the government has been the largest net spender on advertising.

Today they have announced a new initiative. They are taking over your local corner store.

The stores have had a fruit and veg makeover, stocking a wide range of fruit and veg, displaying Change4Life posters and signs, and appointing a member of staff to champion fresh fruit and veg in store.

Each store will receive point-of-sale and in-store branding as well as an ambient stand for display at the front of store.

The Department of Health will continue to support a number of shops in less well off areas where fruit and veg is less easily available, providing funding toward chillers to help keep stock fresh.

Even the humble banana will say ‘Vote for Us FFS’ where once it just said ‘Fyffes’!

By next week the veg will have turned as rotten as this government.

Yes, they are spreading it everywhere. Foreign internet sites as well.
Just today: while checking what’s on Polish TV I was advised what to do in case I lose my driving licence ( DVLA ). Then, while reading polish newspaper on-line I was reminded how effective BBC-license-gestapo is.
No escape, really.

i keep hearing all the crap on the radio.dont do this/that………

no coincidence that browns fake wife is/was in advertising then

chocolate rations up again next week!!!!!!

When I was working with Big Charlie on the freight dock on the railway back in ’57 he wouldn’t touch bananas for various reasons. Perhaps he knew more than I did or do now.

I work from home and often have the TV on in the background. I kept a tally out of interest & counted 37 Government funded ad campaigns.

Anon 00:32 – and Public Intimidation films they are, each and every one of the 37. They make me want to puke. But thanks to an NHS leaflet I know not to bother a GP until I’ve begun to bleed at the ears.

The Yorkshire Post seems to have a full page (broadsheet) advert from the Government at least once a week now. Slop buckets, singing the praises of the NHS, how great the Police are, how safe the banks are, etc, etc.

I appear to have perfected the art of being oblivious to all forms of Government advertising, as I do not remember seeing, hearing or receiving any. In light of what Gloria says, I shall refrain from consulting a GP on the strange but welcome phenomenon until my ears bleed profusely (presumably as a result of all the bullshit being aimed my way by the Government).

Then again; maybe overkill has rendered me immune.

This week my business received a pack including window stickers, so i could declare my shop ‘breast feeding friendly’ . . . !
I’m sure that on rare occasions, a breast feeding mum may have been asked
to stop and/or get out of where ever she’s was feeding her child, but does this really warrant sending out info brochure’s and ‘worthy’ packs ?

In my efforts to counter this authoritarian nonesense, I hereby pledge to put two ‘House For Sale’ signs outside two of my nasty neighbours houses over the next few days.

Interesting FFSake but, no less interesting, fragrant Anna, is that we, you, me and anybody else stupid enough not to be on benefit, have given

Bugger said: “For the mathematically challenged that means that Labour are in

Videogames, even. XBox Live allows for in-game billboards to be altered periodically. Currently the fictional American city of Stillwater in Saints Row 2 is littered with UK government adverts.

It’s not so bad; in real life you can’t fire RPGs at them.