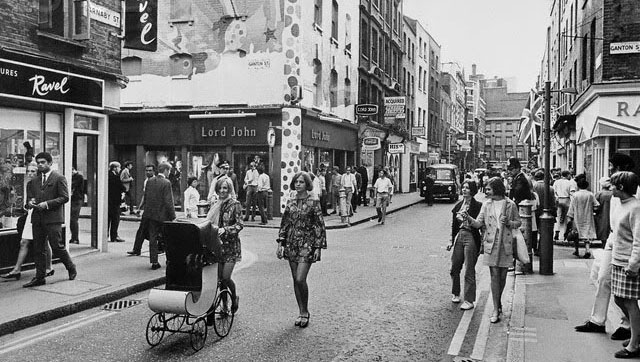 Today, an exhibition opens in London of an event, a life changing event, that transformed lives far more effectively than anything the Nu-Labour activists could dream of. It was a genuine revolution, a relatively bloodless one.

Today, Carnaby Street is 50 years old. That is not quite true, Carnaby Street was around in Dicken’s time, a grimy backstreet at the wrong end of Oxford Circus, unloved by retailers – and hence an area of dirt cheap rents.

Carnaby Street was my ‘beginning’, where I started my life as an independent adult, and I loved it with a passion. I was far too young to work legally, and totally unqualified in anything, but Carnaby Street was a place where new life was forged, where no one had any experience, where everyone was young.

The characters that were around were legendary.

Colin Wilde, the tailor who designed the first cat suits, decided that my ridiculously long legs and skeletal frame (this was 50 years ago folks!) were the perfect vehicle to advertise his product. In return for a supply of free clothing, made to measure for me, I spent my days measuring some of the most famous inside legs around and advising on suitable pouches for ‘padding’ for that all important skin tight cat suit appearance on Top of the Pops. One of the perks was tickets for a show that was the centre of every teenager’s universe. Occasionally I see clips of Top of the Pops and I can recognise myself or Dawn bopping around in the background like demented meerkats. I didn’t actually get paid, but there was a regular supply of the novel ‘hotdogs’ from the Greek Cafe in Beak Street that sufficed. For a teenage runaway, free clothes and a life spent crawling between legs that other teenagers could only dream of being close to, was an education in itself.

My best friend was secretary to Don Arden, then a rising pop entrepreneur, (where are you Dawn?) and she and I would babysit the young Sharon Osborne in his office. We went off to the Galway Bay Oyster festival in grand style in the first Rolls Royce that Charlie Simpson, an ex-East End paraffin salesman, had awarded himself from his Kleptomania chain of shops – and left behind a trail of devastation as Carnaby Street met Anglo-Irish gentry at what was then a very ‘county’ event. I still can’t face Guinness and Oysters to this day.

I had taken refuge with a family of Australian potters who produced something called a ‘mug’ – an item unheard of in those days, and I sold them to Liberty’s – an event which completely overran the ‘we’re artists  – not artisans’ ethos of Hatton Beck, so I journeyed up to Stoke-on-Trent and managed to persuade the Liverpool Road pottery to make me 200 mugs, with a Union Jack on the side.

Liberty’s were far too snooty for such an item, hand thrown pottery, yes, china, nooooo! So they went into John Paul’s new ‘I was Lord Kitchener’s Valet’ shop on Piccadilly, in return, not for money, but for two days helping to paint the shop black – black being the cheapest way of concealing the shop’s previous history. A curious arrangement – John Paul would take your goods on sale or return, in return for your labour!

The mugs sold out within hours, and I hitch-hiked up to Stoke to pay the bill and order more. On the way back, standing on the side of the M1 in pouring rain, a sleek jaguar pulled up and offered me a lift to London. Polite conversation ensued as to what this bedraggled rat in a skin tight cat suit was doing standing on the side of the M1, and when I explained, the driver roared with laughter. ‘You mean you hitch hiked up here just to pay a bill’. ‘Yes’, I said. ‘You’ll never have to do that again’ he said.

The driver was Percy Baskerfield, owner of the pottery. A great friendship followed, he gave me a £1,000 line of credit, an unimaginable sum in those days, and credit for a woman was equally unheard of. When he left his wife and ran off with Ruby, his secretary, improbably to open a fish and chip shop in Tangier, I visited and acquired a new line in kaftans, hugely popular after the Beatles followed the Maharishi to India. Lengths of leather, and a job lot of silver bells turned into necklaces for the hew hippies, and proved a big seller in Portobello Road.

Looking back I realise one curious fact – none of us had any money. We bartered our youth, our energy, our enthusiasm. There was no such thing as social security for teenagers, or dole money. No outreach workers, or social workers. Even at the centre of swinging London, I didn’t know anyone who had ever actually taken drugs, though rumours abounded. The pill hadn’t been invented, so we were remarkably circumspect in our relationships.

And yet they were great times, fun times, and happy memories. We changed the world, we turned pop music into a potent economic force. We shocked, we challenged, we rebelled. We changed the clothing industry. We changed hairstyles and lifestyles. We invented the world teenager. We changed society. We did it all without a mobile phone, without the Internet, without support workers; for most of us, without any visible means of support whatsoever.

Will today’s teenagers effect such a revolution and turn this country round?

Lovely story Anna and happy birthday to the Street.

A wonderful story, thank you for sharing it.

As for the parallels with today’s youth, you know, they couldn’t live that
life now because the powers-that-be wouldn’t allow it. Can you imagine the
rules and regulations, the forms, the checks,the officialdom that would have
to be satisfied on a daily basis? You sold mugs you say? I wonder how many EU
regs you’d need to comply with today before you could legally market such an
item?

I was but a child in the sixties but even I remember everything was so much
simpler back then. Somewhere between then and now we went seriously wrong.
Question is, can we fix it?

Memory-jolting stuff, Anna – some good and some that have made me
cringe.

Good job you didn’t have on one of those awfully trendy embroidered Afghan
waistcoats over your catsuit on your hitchiking trip to Stoke. I still
remember the terrible smell from mine when I got caught in the rain whilst
wearing it; it stunk like a long-dead goat – which is what it probably
was!

Of course, the reason I never had any money was because it was all spent on
the latest fashion in “boutiques” – especially a few years later when Biba was
launched – allbeit in Kensington High Street.

Great memories. Bought my first scooter in ’66 – cost me

I loved it there too. I even got a Saturday job in a souvenir shop there.
The atmosphere was great and the flea markets had great clothes. It’s such a
shame it’s not the same anymore, but then again, London no longer really
resembles London. I spent the first 20 years of my life growing up there and I
don’t recognise any of it. It’s now Londonistan and my roots are gone, along
with thousands of other Londoner’s.

Ah! Nostalgia, it’s not what it used to be.

I’ve been scouring Youtube for some Top of the Pops crowd shots… I haven’t
found you yet, but Lulu looks a lot older then than she does now.

Wonderful story, which really made me smile wistfully. I’m a *little*
younger (not a teenager until the end of the sixties) but I can relate
entirely to the stark difference in “society” between then and now.

It’s a parodied and lampooned thing to say, but I genuinely think things
were better then. My kids find it hard to comprehend when I tell them that
when I was young, not only did we not have mobile phones, but it was not
common for people to have a telephone in their home!

How have we let this happen?

Can’t you manage to reuse some of those entraprenurial skills again. To
misquote the old phrase “your contry needs you”

Don’t get me started….

Love the ‘photo, but aren’t all the people horrendously white.

Err….No. Not from the teenagers I’ve seen and met. They all seem a little
bit wet and all live off mum and dad.
Love the picture. When I see images
like this and when I watch the old Ealing and others comedy films set in the
50s and 60s I think what a great place England must have been then. I was born
at the end of ’69 so missed all this. Also missed all the great rock bands of
the 70s. At least I’ll get to see Gordon humiliated in a few weeks, makes up
for some of it.

Have you tried to talk to a teenager recently? Between the mumbles and
averted stare they seem almost incapable of communicating.
Great story,
happy memories I bet.

I’d love to go back to that time.