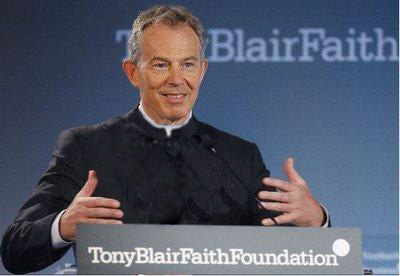 The Middle East Peace Envoy was in town to rouse the faithful and chide the doubters.

The congregation seemed more interested in jailing him than hailing him as the great Messiah, he in turn, was more interested in preparing the ground for the latest Nobel Peace prize winner to take his fervent battle to Iran, than he was in atoning for his sins in Iraq.

He had no regrets, not for the 100,000 Iraqis who died, nor for the hundreds of British and American troops who had died carrying the values of the West into the dark and dangerous world of Islamic fundamentalism.

He arrived with the expression practised in Ecclesiastical colleges, funerals, for the use of; for those times when you know that unbelievers are amongst you, but you must still address all with the warm condescending tones that imply forgiveness for their sins. After six hours of questioning by the heretics, the expression had reverted to the one Alastair Campbell had taught him, the ‘I’m a pretty straight sort of guy’.

He parried useless questions of ‘regime change’ – useless for in 2008 he had  once told the truth:

There is a host of analysis written about mistakes made in Iraq or Afghanistan, much of it with hindsight but some of it with justification. But it all misses one vital point. The moment we decided not to change regime but to change the value system, we made both Iraq and Afghanistan into existential battles for Reactionary Islam. We posed a threat not to their activities simply: but to their values, to the roots of their existence.

The MSM today are still consumed by tales of the international statesman who saved the world from a Dictator, and whether the obscure International Law allowed him to do so.

Blair wasn’t operating under International Law, he was consumed by religious fervour, operating under ‘God’s Law’, bringing enlightenment to the heathens, delivering a massive thunderbolt of God’s word in a firework display of shock and awe laid on by his fellow fundamentalist, George Bush.

The demonstrators outside claimed that this was the closest Blair would come to a trial – in truth it was a televised version of a Billy Graham evangelical meeting. The heretics picked at the details, Blair opened his arms wide and delivered his sermon of the future.

Shock and Awe would continue, the Yemen, Iran, we would bomb the infidels into submission. They would see the light, if only in a blinding flash before their arms and legs blew off.

His vision is an apocalyptical one, the insane ramblings of the tramp in the doorway of Yates Wine Lodge. The paranoid delusions of conspiracy theorists. They are kindly led off into the welcoming arms of the NHS and a healthy dose of Largactil.

Somehow we selected this one to be elevated to a position of national importance, the leader of sandwich board doomsayers the world over, allowed his own personal half million pound escort to ensure that he arrived at his alter in the Mother of Parliaments unmolested. Not for him the long cold days walking the length of Oxford Street, shoulders groaning under the weight of the wooden placards, numbed fingers handing out badly photocopied sheets of his world vision, no, we provided TV cameras and journalists to beam his unGodly message to the entire world.

We must be mad. Perahps he’s right, he is the only sane one among us.

Meanwhile, his wife took advantage of the world spotlight on St Tony to do a little shopping in the libel courts of London.

It was a very polished performance from the boy Blair. DId I believe anything he said ? Not one word. If we take anything from this whole sorry affair I think that collectively, we won’t get fooled again.