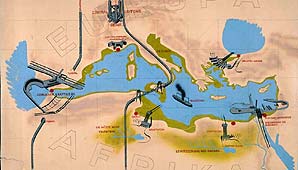 Whilst you were sleeping, Herman Sörgel’s nightmare vision of artificially solving all the major problems of European civilization by constructing an embankment at the Gibraltar Strait to create a new continent, ‘Atlantropa‘, consisting of Europe and Africa, came a significant step closer.

Sörgel was run down by an unknown car in 1952, but his Atlantropa Institute continued to peddle the idea of combining Europe and North Africa right up until 1960. The central feature was a hydroelectric dam to be built across the Strait of Gibraltar – that may happen yet! – in the meantime, the architects of European foreign policy have contented themselves with a ‘legislative’ bridge.

On New Year’s Day, the ‘Euro-Mediterranean Regional and Local Assembly’ was born. They will meet for the first time in just a few weeks, January 21st 2010. It is the bastard child of the Euro-Mediterranean Partnership; a birth shrouded in secrecy and misinformation. A Google search under ‘news‘ for this EU organisation reveals not one, not a single mention, in the British press. It has taken two days of searching through foreign language items to write this article.

When you consider the impact that this involuntary euthanasia of European life will have, it is nothing short of criminal that it has been ignored by the main stream media.

The goal of the Euro-Mediterranean cooperation is to create a new Greater European Union encompassing both Europe and North Africa, with the Mediterranean Sea becoming a domestic Eurabian sea. The goal is to establish a “comprehensive political partnership,” including a “free trade area and economic integration”; “considerably more money for the partners”; and “cultural partnership”.

The Euro-Mediterranean Partnership now includes all 27 member states of the European Union, along with 16 partners across the Southern Mediterranean and the Middle East. Some of the most important agreements include a rotating co-presidency with one EU president and one president representing the Mediterranean partners, and a Secretariat based in Barcelona that is responsible for identifying and promoting projects.

It is an extension of the European Free Trade Area which was the origins of the EU we now ‘enjoy’ in these post Lisbon Treaty days. As such it enjoys special priority status under the ‘Blue Card’ system which will see 50 million migrant workers enter ‘Fortress Europe’ with full rights to housing, welfare, education, and security of employment.

Tunisia now describes itself as ‘Europe’s biggest exporter south of the Mediterranean’. Did you notice Tunisia sliding silently northwards across the Mediterranean? No? Thought not. It is Europe that has slid southwards whilst we slept.

The European Investment Bank is playing its part in this Euro-Mediterranean project making significant contributions to the Palestinian Authority. Europe slides East. And further south, here we are in Egypt.

Whoops, bulge on the south-side – we’ve now encompassed Morocco. All those surreptitious visits by Peter Mandelson have paid off, they have kindly agreed to accept several million of our tax payer pounds to build themselves a new transport system – we can’t have all those new workers being late to their new European jobs!

And Libya! Evenings with Gadaffi’s son not wasted either. 2000 kilometers of Mediterranean sea front, and all is forgiven. Libya has ‘observer’ status to allow them to see whether they might like to dip their fingers in this honeypot, but in the meantime, in the meantime, they are pleased to accept the opportunity to fully engage in the free Migration package, and the EU Action plan to tackle HIV infection in Benghazi……

All taking the first steps towards benefiting from Europe but without the commitment to Human Rights or the need to dig into their pockets to fund any of the more pressing diplomatic or military burdens of Europe.

The American press have picked up on this story, fired by their fear of North Africans with exploding Y-fronts, but not a word in Britain, not a solitary word.

Do try the Anna Lindh web site for an instant education in the buzz words necessary to negotiate a dip into our bankrupt honeypot – €7 billion worth of earnest positivism towards this secretive project…you can get an EU grant for just about anything these days.

By way of some small explanation – did you know that coats of arms containing lions without genitalia were traditionally given to those who betrayed the Crown?

Take a close look at the Royal Coat of Arms, as displayed on Government documents. 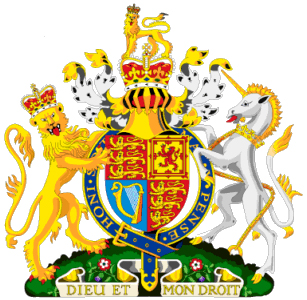 Gone, castrated, a coat of arms for a eunuch Government comprised of pimps and posers, preening and postulating towards their way towards the extinction of the Northern European way of life. They don’t even bother to tell us what they are up to anymore.

Oddly enough Anna, this was also mentioned in a book of fiction, name and author I am unable to recall, that I read years ago. It was basically a thriller about the fall of the EU, encompassing the US having to ‘liberate’ Europe yet again. The damming of the Straits of Gibraltar was the need to drain the Med to provide a fertile growing area for food that the EU could no longer produce.

In passing if anyone knows title and author I would be grateful!

So would I Wittering!

I seem to remember a Star Trek film casually recording the draining of the Med in order to prevent drought in Africa.

Coincidentally I have just been reading Pirenne on the Classical lack of differentiation between Europe and North Africa; to the Greeks and Romans, all lands with borders on the Mediterranean were part of the same world, Mare Nostrum acting not as a barrier but merely as a sort of vast transport hub. But of course this predated the rise of the proselytizing Religions of the Book.

To suggest you are providing a ‘…view of the mainstream media’ is not giving yourself enough credit.
This is real content provision.

When King Charles II married Catherine of Braganza, her dowry included Tangier. Somehow along the way we lost it.

When Eleanor of Aquitaine married Henry ll, her dowry included the Dordogne – Thank-God the English lost that too, it’s quite a reasonable place these days!

There was an attempted newspaper entitled The European in the early nineties. I recall and extensive story about plans to drain the Med. Maybe some kind soul has archived all that stuff. Hope that helps.

Can any party change this, because Her Maj won’t?
Or have we lost the freedom to choose our future?

Hmmm, When empires get too big , they fail. I reckon the E.U. is going to ” downsize” before this happens, it’s something Sarko was banging on about a year or so back and most people I know here thought he is barking…….I think a modern day analogy as to its success might be what has happened to Dubai.

The name of that book is the Aachen Memorandum by Andrew Roberts. Sadly it is out of print now.

The Aachen Memorandum can be had here:
http://www.amazon.co.uk/gp/offer-listing/0297816195/ref=dp_olp_collectible?ie=UTF8&condition=collectible

Such excellent research Anna. It’s no surprise there was little information here.

Pardon me while I forward this to my old colleagues at UKIP – they’ll know what to do with it. Someone should also inform Christopher Booker at the SunTory.

I’m lost for words. What the fuck is going on?

Miliband talked of getting the Maghreb countries into the EU some time back, so this doesn’t come as a surprise. Wait for the Channel Barrage…

Coo-er! Ms Raccoon is being translated into Swedish now…..well I never! It’ll be Turnips next, you mark my words….