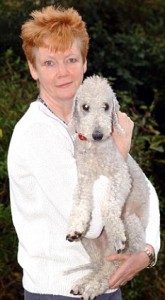 The Redcar Redtop has been at it again – can this woman do nothing uncontroversial?

She has been spending too much time with Harridan Harman. Their recent joint effort was to produce the VAWG report – Violence against Women and Girls, which completely overlooked, nay ignored, violence against men.

This morning it is claimed she has absorbed more than just Harridan’s feminist shrieks, she is now mouthing her arrogant attitude too.

‘Don’t you know who I am’ she is alleged to have said to a humble police community support officer when he tried to speak to her about an offence. Why should he, unless he has relatives in Redcar?

The offence in question, was failing to clear up the foul mess left by her new dawg on King’s Cross Station. Ms Baird had summoned another of the ‘common pe0ple’ – otherwise known as a station cleaner to stoop to the task of scraping up her dog’s effluent.

Whilst she was grandly waiting for him to perform his humble task, she was taken to task by another passenger with a young child who objected to her leaving the mess and walking away. Reportedly, Ms Baird gave her a ‘complete moutfull’ for her temerity in speaking to her thus.

When a police community support officer turned up to deal with the altercation, a by-now furious Mrs Baird made it clear she felt she was being humiliated and allegedly said ‘don’t you know who I am?’.

Eventually, the PCSO took Mrs Baird’s details and submitted a report suggesting the minister be investigated for a low level public order offence for causing ‘harassment, alarm or distress’ – which carries a maximum fine of £1,000.

According to sources, a number of officers thought charges would be brought. But, after ‘reviewing the evidence’, – a smelly task indeed! – senior transport police officers ruled that the case be dropped – much as the evidence was….

Shouldn’t our MPs be issued with identity cards, showing them to be very important personages, who should not be expected to act with decency or honesty. Lowly PCSOs should have some indication to inform them that these grand personages can talk on their mobile whilst parking their car, or indeed whilst streaming down the M6, mowing down innocent voters. Nor should they be expected to retain photocopies of important documents when hiring their cleaning staff. It is not good enough that they be treated as ordinary human beings.

Otherwise incidents where PCSOs see a dyed red haired slapper being abusive, and causing harassment, alarm and distress to an innocent Mum are liable to be investigated right up to the level of senior officers before someone realises that in fact it was an MP behaving perfectly reasonably.

This proves without a doubt that our legal system is in full working ordure.

Did Neddie Seagoon have just the one sister?….

Remember Santa loves them all – even the ginger ones……

Did Neddie Seagoon have just the one sister?

That is a foul calumny against Mr Seagoon, madam!

She complained about the PCSO to the BTP and got an apology from them!!

Hmmm. Let’s just see what responsible dog-owning thoughts ran through Vera’s legal head before she set out with Fido….
“Off to take the pooch for a nice little stroll at a massively busy mainline station … Have I got everything? Massive ego? Check! Pooch? Check! Lead? Check! Plastic bag? Nah, I shan’t bother with that, everyone is sure to know that I am far too important to pick up a puppy pebble..”

she should have her nose rubbed in it!

Why wasn’t her fingerprints and DNA taken?

Maybe she could be related to the dog?

I’m assuming the dog is the one on the left. Only the one on the right has the IQ level I associate with MPs.
In which case, this MP has four feet. All the more to shoot at, grandma…..
YM x
PS apologies for the vulgar self-publicism Anna, but on the subject of protecting women and children, see http://www.notbornyesterday.org/harmballs.htm

It was merely an innocent inquiry – I’m sure there’s no need to go on about it so, Mr Thaddeus.

Silly Goon puns aside, Ms Baird’s dog looks like a Bedlington Terrier – often referred to as a ‘dog in sheep’s clothing’: if she’s prepared to kick up a stink rather than pick up a stink, she deserves to be thoroughly lamb-poohned, doesn’t she?

It is often said that people chose their dog according to their own character. The Bedlington looks like an innocent little lamb, but is originally established as a fighting dog. Quite a nasty thing, actually. I flatter myself having chosen for Irish Wolfhounds:

So the BTP rolled over while Ms Baird “tickled its tummy”.

Like the picture, I have a mental image of her fiendishley stroking her dog saying “Ah 007, we meet again”

G-l-o-r-i-a…Gloria
I sense you have time on your hands.
In most 007 movies Saul, I seem recall the villain usually had a cat or terrapins. The scene always ended with “Goodbye, Mr Bond”. But of course it was merely ‘au revoir’.
I’ve always been more of a Hornby 007 man myself.
YM x

How do you “fiendishly” stroke a Terrapin?

Let me see, vicinity of Kings Cross, female of indeterminate age and very dyed hair hanging around. Female carrying dog, not really for protection with a mutt like that, more perhaps as an excuse to walk the streets. Also female has a ready command of low invective. It is entirely possible that others could make entirely the wrong assumptions.

No, better not go there!

Excellent piece of imagination there, Demetrius.
My first wife has a flat in Kings Cross.
Nuff said.
YM x

I haven’t so much got time on my hands as the sweet scent of someone who deigned to pick up their dog’s-doody today and pop it into the plop-bin as the law states I should.

“Ms Baird had summoned another of the