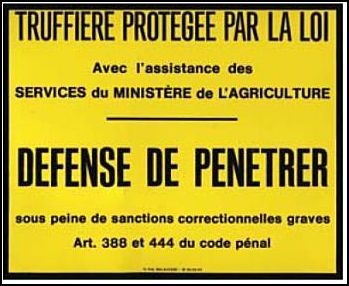 The weather is still 20 degrees plus every day, the skies are clear and blue, but we know that Autumn is with us for the woodlands in these parts bristle with signs warning that the age old Perigourdine tradition of hunting for mushrooms is interdit here, and here, and over there too.

You quite literally take your life in your hands, and definitely that of your dog, if you wander the crisp tracks of the local oak forests now that November is nearly out.

The humble peasant’s mushroom has been infiltrated by organised crime.

Time was when only the Truffle, the most highly prized fungi of all, attracted the attention of criminal gangs. Today, the humble cep, with its price tag of €30 Euros a kilo even in the local market, can earn a man €7,000  in a couple of weeks – a significant income in an area with an average wage of €10,000 a year.

Many of the local Chateaux are surrounded by wooded land of anything up to 100 hectares – historically they have turned a blind eye to the parties of local families who turned up with a wicker basket to collect ceps to preserve for winter food. They are not so enamoured of up to 20 strong parties of armed Romanians who are prepared to shoot to preserve their haul.

Last month, the French health authorities warned mushroom enthusiasts yet again that they should be absolutely sure of what they eat after a dozen people were hospitalized — three in intensive care — with mushroom poisoning over the course of just two weeks in western France. Every pharmacist in France is trained to identify the different varieties, and will not bat an eyelid if you walk in with a basket of assorted mushrooms and ask them to tell you which ones you can eat.

There is a network of ‘depots‘ who will buy your surplus mushrooms, clean them and ship them to Paris overnight – that is the legitimate market. There are also the local markets where you may find ‘Madame’ standing guard over one gnarled cep, unwilling to disclose the exact quantity she has for sale. Quantities offered and prices agreed are passed back and forth on small slips of paper to lessen the chance of ‘trade secrets’ being revealed to nosy neighbours. It is no place for the amateur buyer, lead shot can be inserted into the fungi to make them heavier, dried out ceps soaked in an unmentionable concoction overnight to plump them up.

Now the market is to be regulated, with licences issued and armed guards employed to roam the woodlands.

Between the armed Romanian gangs, the newly armed ‘forrestieres’, the foraging wild boar, themselves tracked by other armed hunters, and irate landowners shooting at anything that moves, the dog will be getting its daily walk along a tarmaced road between the rows of vines. There is only so much excitement I can take in the winter sunshine.

Errr I live in Le Pechament, in the commune of Creysse in the Perigordine
and yesterday ( saturday ) my wife picked nearly 4 kilos of Cepes as well as
20 kilos of Mushrooms. As she was born near here and grew up on a farm I’m
surprised to hear that crime syndicates are getting in there as you have to
know exactly what you are looking for or else as some people have found, you
will end up in hospital ; not too good for trade in the longer term.

Just stay at home and settle down with a DVD of Sondheim’s “Into The
Woods”.

Thanks for the blue skies re this one. It is hammering down here, and
Cumbria is underwater….so it won’t be long before SW Water gets the standpipes
on the go again.
Le trouffle encore….so many issues raised by this one –
not least the Irish attacks on Romanians, dismissed by the la-la UK media as
yes, you guessed it – hate crime. Naughty Ulstermen, objecting to their
wallets being nicked on an hourly basis.
The problem with the French and
guns is that they’re like the Americans in this regard, minus only the innate
Yankee sense of caution. We won’t take out terriers out on hunting days any
more – far too dangerous.
As for the Health & Safety outcry about
mushrooms, the pharmacies are as incompetent as ever. I spent three days last
year suffering from dysentery, having been told that the ones in our garden
were ‘de Paris’ as opposed to the daiorrhea they really were.
YM x

Nice to know that the UK is not the only country where crime is
‘mushrooming’!

Anna,
I have to admit we have it very similar here – except for the
armed Romanians at present. Our biggest ‘problem’ are the local hunters who
seem to want to carry loaded and cocked guns when they scramble through the
bush – it’s not much fun having shot whistling over your head.

Just be careful walking through the vines. A couple of years ago I did that
with my and a friends dogs. Wondering why the dogs were keeping close instead
of their usual being everywhere I looked round and found a wild boar had
attached itself to us to get past the cordon of hunters – I kept on walking.
Once clear of the hunters it disappeared much to my relief.

It’s much fun in the French countryside at this time of the year – I
wouldn’t miss it for anything.