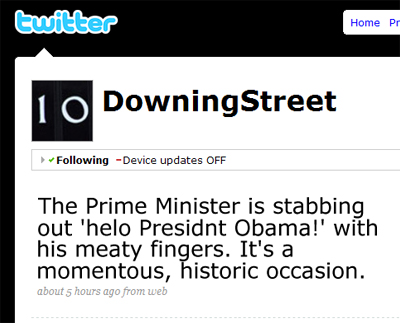 How fitting that the end of the much vaunted ‘special relationship’ should come about in the kitchens of the UN building.

The BBC headlines over the past year tell the story poignantly.

Brown and Obama to meet in March. Feb 09.

The humiliating image of Gordon Brown scuttling between the bain-maries hoping for a last glance, a kind word, from the gigolo who, if truth be told, had continued to agree to occasional trysts merely to ensure that the loan granted 60 years ago was finally repaid.

A wiser courtesan than Brown would not have risked a dalliance with Colonel Gaddafi when he no longer had a hold over his Sugar Daddy.

60 years ago the United Nations was a mere infant, Britain a vulnerable and accomodating young woman, and Uncle Sam, feeling virile, draped the The Marshall Plan around her neck to plight his troth, with the proviso that she should repay annually the price of this glittering bauble.

In 2006, the raddled and infertile old crone that Britain had become, repaid the last of that debt. Uncle Sam was heard to say that he found visiting her a ‘faintly depressing experience‘, that had an ‘end of regime feeling about the whole thing’. She was ‘lacklustre’. Uncle Sam was looking East and wooing an ingenue Chinese maiden.

Gordon Brown, imagining he still had powers of seduction over Uncle Sam, responded to this chain of events, with a series of afternoon meetings in a seedy motel with that old goat Gaddafi. He plied him with gifts, an oil exploration contract, the Libyan bomber al-Megrahi was delivered to his tent. Gaddafi groaned with pleasure.

Sam’s patience was exhausted. Thus it was that when Brown flew over expecting champagne and oysters, he found only a fake award for ‘global statesman‘ bestowed by that relic of the 60s, Bono, and despite his plaintive bleating, was reduced to lurking in the hotel kitchens as security smuggled his gilded suitor off stage and safely past his fans.

Gordon didn’t even get an autograph.

Made it, Ma! Top of the world!

BO seems to be backpedalling faster than Lance Armstrong on speed – it’s no surprise that we pinko liberals are such a cynical bunch. Feet of clay, anyone?

A passionate embrace from Obama after the release of Al Megrahi was always going to be a big ask. Brown could have saved himself the embarrassment if he just had the self-awareness to pose the question “Does my ask look big in this?”, but then Brown always was the frumpy sister whilst bubble-headed Blair really knew how to gussy up and keep his Bush trimmed.

Anna are you well?

Perhaps I should have yelled “Yo Barack” when I saw him.
He probably doesn’t speak a word of Gaelic

Gordon refused to meet him when he was a presidential candidate. It has come back to bite him badly.

Oh you twat Gordon. You really have fucked up this time.

The cream at the top has a layer of mould spreading over it and making it crusty, and Barack can smell it across the pond.

Obama was unable to meet Mr Brown yesterday because he was staring at a rug
Mr Obama will meet Ivan Lekov at the United Nations later today to discuss Bulgaria’s drive to improve table tennis facilities for the under 14s.

let’s just hope and pray that Gordon understands the needs of under 14 year old Bulgarian table tennis players because as you will appreciate – THIS COULD BE WAR!! Nokias loaded and ready to fire….

I wonder if the GB and BO will lie back and have a relaxing post- coital ciggie?

Labour pains – the consequence of getting royally screwed.

Left holding the baby – the consequence of Labour pains.

Seems like I think I want to spend the evening at home.. after all.

If the “Special Relationship” is ended can we now bring our troops home from that rat infested, sandy hell-hole, inhabited by raving lunatic ragheads,known as Afghanistan?

Actually it’s the US that is not what it used to be. So they could have been old crones together.

Think we’d better forget the burgers and get used to curry and noodles.