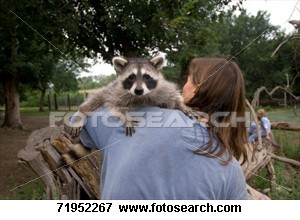 David and Ena Webber, from Christchurch, Dorset spotted me while they were trying to record birds as part of the RSPB’s monitoring exercise, the Big Garden Birdwatch, which took place this weekend.

They called the police, who said they had no reports of a missing raccoon, and then the RSPCA.

The charity said it did not know where it had come from but said it was in good condition and was probably someone’s escaped pet….(Saul’s??)

Mrs Webber, 71, said: “We were trying to do the RSPB Birdwatch this morning when we spotted it at about 10 o’clock. We thought it was a cat.

“Well, cats and birds don’t go together so I fired the water gun at it and its little face came out and it just looked at me and said, in no uncertain terms: ‘Stop I want to go back to sleep’.

“It wasn’t impressed at all. It had such a cute little face. It stayed in the same tree, on the same branch and didn’t move. It was fast asleep.

“It’s a total mystery, nobody knows where it’s come from. Police told us they had no records of a missing raccoon.”

Katie Geary, RSPCA spokeswoman, said it was unusual, but not unheard of, to find an escaped raccoon.

She said: “The officer tried to use an apple to coax the animal down but it failed so he used a grasper around its middle to gently get it down from the tree.

“Raccoons are semi-nocturnal animals so it was very sleepy. It was in a very good condition. It was about 10kg (22lb), the size of quite a large cat.

“We think it’s owned by someone in the local area so if someone has lost a raccoon they should contact us.”

The raccoon is being cared for at a local RSPCA rescue centre, and has been given acess to the internet and a laptop……..

A spokeswoman said a number of raccoons have been captured by the charity in recent years.

She said raccoons were recently excluded from the Dangerous Wild Animals Act, so it was no longer necessary to have a licence to keep them.

“People should be very wary though, because they can give a nasty bite,” the spokeswoman said.

I’ll get my coat…

She would be a wizz on schools sports day though!

In view of her deficiency in the leg department, at least she won’t be
expected to go waltzing with Matilda, so there’s a blessing in disguise… that
Matilda’s responsible for more split corns and crushed bunions than you could
shake a stick at.

She is in the Raccoon relocation protection scheme run by Rolf Harris.
Living under the pseudonym of “Jake”.

That’s a worrying remark Saul and one which has me stretching my eyes in
horror; quick, Madame Raccoon! Peg-leg it! Hirple to the hills!

How to explain the mystery of the missing leg…….simples!

Ms Raccoon has been playing James Caan to my Kathy Bates.

You can run Ms Raccoon, but you can’t hide!

I thought as much. It’s a wonder you managed to clamber into the tree in
the first place, but where there’s a will, there’s a way I suppose.

Three front legs and no back leg is the reason they caught me, t’was my
downfall……..

Yikes! What an ordeal – it’s never nice to be hoiked about by means of a
grasper round yer middle (believe me, I know) and I have a strong suspicion
that being ‘captured by the charity’ can be a very unsettling experience in
itself. Access to the internet and a laptop is the very least a
recently-rescued raccoon could reasonably expect to make up for the indignity.
I trust you are now fully recovered from being grasped and captured and I am
very pleased to see you back, even though in the photograph above you appear
to have three front legs. Hmmmm. Perhaps that explains the resigned
expression. Anyway, hurrah!

I’m glad you’re back. I missed you!

I wondered if the thought police had got to you. Relieved to see you are
alive.

Welcome back Anna. Hope Mr. Raccoon is enjoying a well earned rest after
catering to your whim and pleasure.

Talking about animals and nocturnals and stuff. ….

the other evening, around 8pm I looked out of my study room window….to see
the outline of two little owls sitting next to one another on the roof of our
shed/studio as the sun went down. A distance of about 100yards. This is not
unusual. What was unusual was seeing one of them leap on the head of the
other, wriggle about abit and then appear to start the mating process. There
was a lot of excitement and it was all over in 5 seconds…then they both flew
off. I have a large camera lens set up on a tripod but was unable to take
pictures because it all happened so quickly!

Certainly one of them returned and sat on our house roof making all sorts
of weird noises and flapping about a lot. Indeed, at one point I thought it
had come into our bedroom because the balcony doors were open. We had a little
owl fall down our lounge chimney last year. It was sitting on the floor there
looking a little bemused.

I thought you’d got swine flu or something equally noxious. Glad to hear
you are OK….if a little sleepy.

Glad your back on, you’ve been missed.

Good to see you back – trust the message got through? Speedy complete
recovery Anna – glad the RSPCA taking care of you!