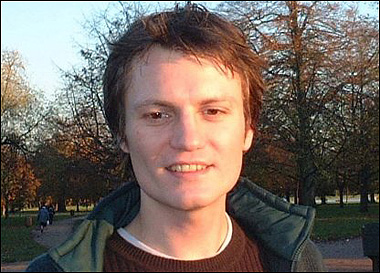 THE son of F1 boss Max Mosley has been found dead after a suspected drugs overdose.

Alexander Mosley, 39, a respected economist and a doctor, was discovered in his home in Notting Hill, West London.

It is difficult to forget the quiet dignity of Max Mosley, or his considered words as he gave evidence to the select committee on Press Standards a short time ago.

The News of the World had taken his “dignity” and hurt his family, he told the culture, media and sport committee.

“Can you imagine seeing pictures like that of your father? It’s not very nice for me. What’s really appalling is for my family.”

It really is time for the main stream press to get back to investigating serious issues, and stop the constant flow of celebrity gossip.

What a terrible legacy for for a cheap ‘kiss and tell’ story.

Well, I did know Alex Mosley very well, and the media attention had a
terrible impact on him. It was so horrible. At least now he is at peace.

I expect neither Karen nor Ms Raccoon felt obliged to write theirs arguing
whether Northumberland was better than Holland in the clog-design wars. No, I
thought not.

Your supervisor must have been riveted Gloria.

I took at night sleeper to Berlin recently – first class doesn’t even
give you a choice of which three other men you are going to spend the night
with – and at my age I can’t be too choosy….but……I netted two exceedingly
flatulent salesmen who passed out before the train had left the Paris
suburbs, and….a Norwegian, dour lot at the best of times, but this was a
particular dour one, who was traveling back to hand in his dissertation
on………viral skin diseases in seals. I kid you not.

He didn’t sleep a wink, and having unwisely said Good Evening when I
entered the carriage, had given him the clue that I spoke English. The
dissertation had to be in English, and he spent the rest of the f***ing
night reading the damn thing over and over again until he was sure that I
was happy with the English.

I arrived at Wiesbaden in the early hours with matchsticks holding my
eyes open, a more than working knowledge of seal viral skin complaints, to
be met by a very good looking young man with a snazzy sports car who looked
aghast at this apparition he had to take out to lunch!

Well done Karen. Those dark, dissertation days are behind you. No wonder
you are tired – I used to work through the night writing mine.

I’ve finished – it’s handed in – I’m doomed or I’m saved, nothing I can do
about it now. The only thing is – my system has collapsed – I’ve been sleeping
like a Koala bear for a week. x

Karen, congratulations, been there myself, and I know how awful it is.
Had mine proof read by two different judges, and still sat up for almost 24
hours proof reading it all over again. 18.000 words. I knew them by heart! I
didn’t know what t do with myself for weeks afterwards, it had been my first
thought every morning and my last thought every night, it was like a
bereavement.

That’s a true obsessive talking there!

I’m not sure why you connect a son’s drugs overdose with media coverage of
his father. Are you suggesting it was suicide? As far as I’m aware in the news
it’s just ‘drugs overdose’, it’s not clear (I think) if they are prescription
(prob suicide) or illegal (prob accident).

It mentions that someone went home with him

What a snide little piece in the Guardian!

Clever, factual, but a classic example of the media taking the
opportunity to stick the boot in.

They are so selective though – there are stories concerning Tony Blair’s
private life that have been common currency in Canary Wharf for years now,
but have never seen the light of day in print.

Mosley? Oh, that’s different, his Father was a fascist – burn him at the
stake!

@Plato
Never mind, now that Draper’s at a loose end he can counsel them
all.

Ditto – if he wants to have ‘an affair’ then that’s his business, but he
was still immensely stupid to take what appears to be ‘a professional’ to his
office for a one-night stand.

Lots and lots of peeps have affairs for lots and lots of reasons – I have
no problem with that at all – Mr Griffiths showed an immense lack of
judgement, lied about it, stone-walled and then had to confess.

What an arrogant shit. Oh yes and he was Our Glorious Leader’s Best
Man.

I wonder if Mr McBride was a guest too?

It seems somewhat pointless to condemn the MSM for doing what is a large
part of the reason for its existence – writing about ‘celebrities’ and calling
it ‘news’.
It may not be edifying, fair, moral or even, at times, legal but
that’s just how it is.
As soon as you do something that the MSM classes as
‘news’ then it’s up to you to take measures to obscure it, deny it or front it
out.
If these all fail then you only have yourself to blame.
Harsh, but
pragmaticism often is.

I’ll say what I said earlier…if you don’t like the game…don’t play it.

My only sympathies in this matter rest with the family.

I’m with Mr Moseley on this one – if he wants to be spanked until an
Elastoplast is required, so what?

I thought he was immensely tough/impervious to front this out and go before
a Select Committee.

The NOTW gets great scoops at times – Mr Nigel Griffiths springs to mind as
someone paid from the public purse caught with his pants down in the HoC – and
is stupid enough to photo his conquests FFS.

That is a story – salacious yes, but showed him up to those who voted for
him and expected their representative to be a pillar of the community.

Mr Moseley is a private citizen with a very well paid job – I see no
comparison other than sex.

Interesting the Griffiths case – I thought it was justifiable simply
because he was using his H of C office that tax payers pay for – but I
wouldn’t have been so sure if he had just been having an affair.

If Mosley wasn’t arrested and charged for it (I didn’t bother reading the
story – so I don’t know what he did) then it doesn’t need to be in the
newspapers.

He may or may not be a terrible person – but prurience is a hypocritical
way of punishing him & his family for his personality flaws.

Have you finished the diss now?

Sorry Anna, Mosley’s point was entirely that the matter should have been
suppressed and he was certainly not arguing on anyone else’s behalf; he was
looking after Number One.

I disagree Cato, I don’t think it was ‘entirely that the matter should
have been suppressed’. I think he went on at great length saying that he
thought a judge should have been asked whether it was in the public
interest. Naturally he hoped that the judge would have decided that it
wasn’t – but he was aksing for it to be submitted to a judge, not suppressed
automatically. I both watched the original hearing and spent a considerable
time pouring over the transcripts – I can give you a link later on tonight
if you want, but it’s a magnificent 30 degrees here and I’m going to water
my garden!

I for one am glad to see the Mosley Branch of human evolution withering and
dying.

Sins of the Grandfather and all that, Postal Vote?

I’m not being judgemental here about whether or not he should have behaved
in that manner. Chacun a son gout. However, when you stick your head above the
parapet, then expect to attract sniper fire.

Perhaps Mosley should have thought of the effect on his family before he
indulged himself. There’s no point complaining that you don’t like the
punishment when you’ve been caught with your hand in the till.

Cato, I agree with everything you have said – in respect of any
punishment Mosley received.

However, his family were also punished and whilst he ‘should have thought
of that’ they had no more control over events than for instance the unborn
child of Samantha Orobator……..if she is shot, whilst pregnant, (which I have
no doubt will not happen!) then that child will also be paying the price for
what her Mother has done – which is the very reason that I suspect it will
never happen.

I had a friend years ago who chose to make a very public statement of her
‘coming out’ on National television – her daughter committed suicide a few
days later. Yes, of course she ‘should have thought of that’……but children,
even adult children, can find a parents sexuality very difficult to deal
with, particularly if it is of a nature that makes others talk about it. I
just think that is something that the press should bear in mind, and
Mosley’s point was not that the matter should have been suppressed, but that
it should be left up to a judge to decide in chambers whether or not the
revelation, or even the form of the revelation, was truly in the public
interest…..the editor of a newspaper under economic and other pressures is
not best placed to make that decision.

It would have been very easy for him to go before that committee and
argue simply for his own privacy, but he didn’t, he was arguing for a
trained, impartial mind to consider the effects on all the parties and then
to publish if it was in the public interest. I thought that
was a very dignified request.

Mosely, for all his pretend “quiet dignity” which you so admire, really is
a very nasty piece of work indeed. The FIA don’t know how lucky they are to
have him.

This is a man who has shown he is quite capable of using his public
position to further his private grudges, and no-one harbours a grudge better
than him. This is the man who, when faced with entirely justifiable criticism
from the dyslexic Sir Jackie Stewart, hit back by saying Stewart was a
“certified half-wit”.

The press reporting of his whoring activities was completely justified
because it called into question his honesty, moral values and judgement – all
are relevant in considering his suitability for the position he holds.

The responsibility for the impact upon his family is his alone.

I take it you don’t form your impression of whether his dignity is real
or ‘pretend’ from the television and news papers?

You know the man personally do you?

If not, your opinion is no more valid than mine.

If you don’t like the game don’t play it.
Mosley was perfectly happy for
favourable headlines about himself to be printed, but didn’t like it when the
scenario changed.
I’m sorry about his son though.

When you think that his main concern was for his family – then it is
reasonable that he didn’t mind the good headlines only the bad ones.

I do agree with you to a certain extent Cato, but is it really news? Is
it really what we pay for newspapers for?
The Archbishop of Canterbury
int he same position maybe – for he is taking a stance on moral issues, but
the sole reason that story sold was because Max was famous for motor racing.

Of course he ‘shouldn’t have done it’ that goes without saying, but I
also think that the newspaper ‘shouldn’t have printed it’ – his family
didn’t ask for that exposure and could do nothing to protect themselves from
it, so that factor should come into the equation when making the decision
whether to print or not.