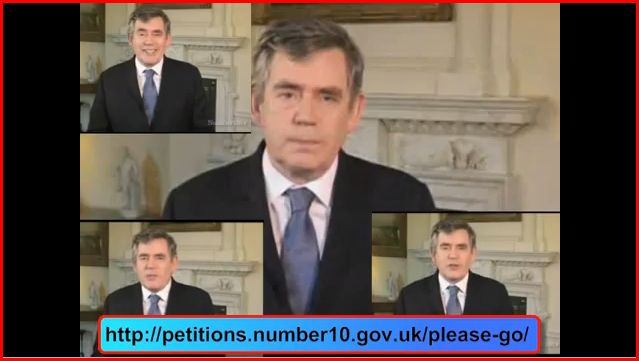 The Prime Minister announced today that he would continue to provide much needed mirth and merriment to the swine flu ridden electorate by appearing on You-Tube when he had important announcements to make to parliament.

Presumably if this is a success he will no longer attend Prime Minister’s Question Time in the Houses of Parliament and direct all written questions to “the answer I gave earlier on You-Tube”.

The last three You-Tube efforts from Gordon Brown achieved the acclaim of being immortalised on “Have I got News for You” – the ultimate accolade for comedic distinction.

Roll-up, roll-up, split your sides laughing at the Prime Minister of that once noble nation, Great Britain, as he upholds democracy in amongst the teenage Rap artistes.

Pleased to see you back, young Anna! Trust you now well?

Are you feling better girl ? I trust you have not been hanging around any Mexicans with runny noses !

Hmmn, there was a lot of waving….Mexican waving……?

Coo-eee! Gloria is considering doing a celebratory cartwheel to mark your return …

… rummages through crumpled-contents of Avelanche Cupboard for suitably modest undergarments …

good to see you back anna

… and then Don told me I couldn’t wear his roomy bloomers, thus thwarting my gymnastic display. Ah well, ’tis probably for the best. Recently recuperated raccoons can be easily startled.

I do hope you’re feeling better, my dear!

Ah good stuff, nice to see the McSnot muncher will be allowing the plebs to mock his appearances on YouTube.

Cartwheels…wait let me strap a blindfold on.

Loved the woman interviewed on CNN. Sporting a mask she said……….

….this wont affect me İ will carry on as normal…..

{sorry no punctuation until further notice}

as jo would say, such fun