Glancing, as you do, at the Independent web site, I caught sight of a list promising to disclose which frisky fun-purchases might qualify for inclusion in the siteâs list of the Ten Best Sex Toys. So, I read onâ¦..

I clicked through 9 pages (nothing if not dedicated, our Gloria! Ed) of fairly predictable âaidsâ (hand-cuffs, frilly knickers, edible body paint (yawn)) and, as if kept back for the bored and portly housewife among us, No 10 on the list turned out to be this. 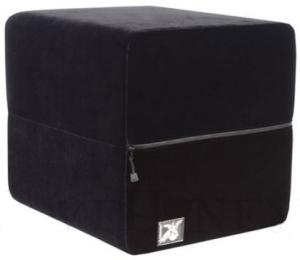 Hmm. Fighting back the irresistible urge to buy one straight away?

No, I thought not.

This faux sexy-blob is something called The Liberator and apparently costs Â£104.99.

It is described thus:

âEssentially a tarted-up stack of cushions, the liberator is a foam-core block that unfolds into a shape thatâs designed to facilitate a range of sexual positions. It has a removable casing for easy cleaning, and could be used as a foot stool at quieter points during the eveningâ.

What the ruddy heck is that supposed to mean?

What springs readily to mind when you visualise âa shape designed to facilitate a range of sexual positionsâ?  A hexagon? A right-angled triangle? A rhombotic dodecahedron?  Is The Independent suggesting we should all have this ugly sponge-clean pouffe in our living rooms to maintain our marital harmony?

What springs to my mind in face of this nonsense is a ball of marketing literature screwed angrily down to the smallest thing a furious fist could make of it. Is this the out-of-touch whisper of a marketing mogul gone mad? Without the sales figures I guess we will never know.

I accept Iâm getting old. I admit I look like Hattie Jacques. But at least I have the imagination to fling a few exhausted sofa-cushions on the floor when I can persuade the thankfully-short-sighted object of my menopausal lust to engage in a bit of impromptu hanky panky. A wipe-kleen suedette cube at over a hundred quid? It wouldnât transform my very married sex-life, so thanks but no thanks on this occasion.

Janes â that was disgusting, I felt I must know what Felching is but I
seriously regret my decision. PUBLIC WARNING: Do not listen
to the above link unless you have a strong stomach and a un flappable sense of
humour!

Whatever floats your boat, Saulâ¦

Also, regarding the matter of said cubic monstrosity unfolding âinto a
shape that

The bit I found funniest about the Liberator and itâs description was this
inclusion:

âIt has a removable casing for easy cleaning, and could be used as a foot
stool at quieter points during the evening

She has a way with words, hasnât she? And with many other things too, I
guess

I know nothing of this thing you call sexual activity and the encumbent
sex-toys. I am an Alien â¦â¦â¦. and we have no need for such things.

However â¦â¦â¦. if I had need for such things as a this pouffee â as Saul
quite rightly describes it â I would rather just discreetly use pillows or
something home-made â¦â¦â¦â¦ Rather that than have my name on several databases
across the world with regard to my having made a purchase of such an article.

If anyone were to buy one of these things â¦â¦â¦â¦ I think they would be mailed
to death â or at least into their nineties â with brochures recommending that
they buy at other unsavoury and unimaginative products.

How does one explain one of these things to visitors or guests?

I certainly hope that these cushions do not become addictive either! Or
that the owners canât walk past it without wanting to chuck each other onto
it!

When my dog was alive he had his Humphrey-Hump cushion and couldnât walk
past it without giving it the eye. We used to have to hide in a cubby-hole
every time somebody came to the house â otherwise it could be very unpleasant
for people who had never seen a large dog doing âthingsâ with a cushion.

And he was neutered â¦â¦â¦â¦. Which we cannot say of many people â¦â¦â¦.. yet!

No rabbity-things or suchlike on the list janes. And what you say of the
furious fist is, I likewise suspect, quite true; it was not a phrase I used
lightlyâ¦

It looks a bit like the personal gym that was featured on last weekâs
Apprentice, but more pliable. Was there any mention of rabbit ears, or ram
pants or something like that on the list?

And I wouldnât mention furious fists if I were you Gloria, I believe they
can be very arousing in certain quarters.

Corrr! After 40 years, we still canât get information on the mysteries of
Boothby and the Krays until a few more elderly Establishment figures drop
dead. â¦â¦â¦â¦â¦.. So how many years is it going to be before we see what Blair,
Browneye and Jacquiâs mob have really been up to?

Oh. It isnât on till tomorrow. (Iâll have to get my ears syringed tooâ¦)

I was just about to join in with this fascinating thread (!) but theyâve
just advertised the Embarrasing Illnesses programme with a tantalising trailer
on pelvic floor muscles and stress incontinence, so naturally (given my age
and implied infirmity) I will have to tune in to that â¦ if only for the sake
of my carpets â¦

Does it have a gimp mask for Mr Draper?

And how about a 12v adapter for caravan use for Mrs Beckett?

I do wonder where these people get these lists from.

I have it on very good authority that the best aid ever is the Hitachi
âMagic Wandâ.

Various attachments that you can get for it are highly recommended

But its very powerful and the fact that its mains powered means it never
stops (as long as you keep feeding the meter)â¦..

What are sexual positions? I think I can just recallâ¦

Zak â¦â¦â¦.. What a wicked thought! I think you may be right! â¦â¦â¦.. And they
mainly have connections to the Labour Party as well â¦â¦â¦â¦ which is obviously
most un-independent these days. Christ! I bet they have all been secretly
making up vulgar emails and gathering together to watch dirty films with
Jacquiâs chap.Thanks for this Zak. I will view them in different light from
now on. They all seem to have terrific expense accounts as well!

Coco, I see your point. Could it be that these âmeetingsâ they have to
attend and organise so frequently are just large group sex sessions aimed at
relieving some of that pent up anxiety?

Itâs
just that the only avid Independent readers that I know these days are so
strung up worrying about the state of the nation and world poverty that they
never see their other halves because of all the extra meetings and meetings
about future meetings that they have to attend and organise.

Coco, itâs normally the quiet ones that surprise youâ¦
Gloria, where is
your sense of adventure? Stuck on one of the previous pleasure aids perhaps?
In fact, to me, this device seems to be aimed at the aged or infirm to
facilitate positions the younger among us can still achieve with only mild
exertion.

Umm, on first glance I thought it was a special toy for ladies with square,
umm, âopeningsâ. Not that I have ever met a lady with a square opening you
understandâ¦

Whoever did the marketing and advertising for this needs sacking.
Independent readers are far too busy being independent and serious these days
to find time the time to even talk about sex â never mind do it.

It would perhaps reach a wider market with the Sun and Sport readership â
especially if they do a model in red vinyl.