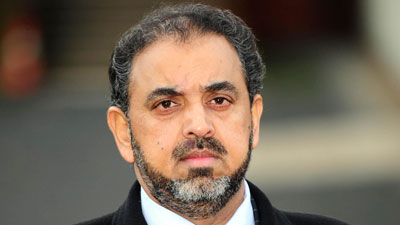 Our Lord in Belmarsh,

Hallowed be thy name,

Our will is done.

Compare Lord Ahmed’s 12 weeks in prison for killing a man whist texting and driving with the 21 months Philippa Curtis got for a near identical offence?

A motorist who sent and received more than 20 text messages before she crashed into another car killing its driver has been jailed for 21 months. Philippa Curtis, 21, from Suffolk, was texting before she hit the back of a stationary car at 70mph on the A40 near Wheatley in Oxfordshire.

Have just seen an ad on TV for The Sunday Times. Can’t believe they’re
getting in on the act as well. Anything you can do I can do better!

It all reminds me of Saturday and Sunday afternoons at my Grandparents
………………. They always had these films on.

Did everybody love Maureen O’Hara, and Dame Anna Neagle too? Did you pluck
your eyebrows to look like Liz Taylor?

Did you do that as well Saul?

It’s a calamity, janes went to bed before the lights went out. The thrill
of it all was too much to cope with.

Where were you when the Lights went out?

Thank goodness, I was running out of Doris Day film titles….

Now your’e getting the hang of it…

You can have the last word.

It Happened to Jane.

I’ll see you in my dreams …

The Man Who Knew Too Much……

I’ve niven heard of that one.

Goodnight, and God Save the Queen.

Under a blanket of blue!

No, surely I told you I was going to Shanghai …

Now you’re not getting onto spooning are you?

By the light of the Silvery Moon……..

Eeeeeeeeee! Dirk Bogarde with his boyish fringe ………………. Of course that was
in the days when my Grandma said men were men.

……………. Of course homosexuality had not been invented in those days ……………….
according to my Aunt who knows a thing or two about sex – let her tell you!
She reckoned that it was the 1960s that brought out all the homosexual urges
in everybody!

She could not recall a time when she had ever come across a homosexual
couple. All her female friends who lived with other women were only doing it
because they were spinsters and nobody would marry them!

The men who lived with other men were bachelors who had never found the
right women – despite their film-star good-looks and ability to keep a nice
home.

My copy of The Shawshank Redemption is on the way, I do hope that he
manages to avoid bending down for soap and the “Sisters” whilst inside.

Dirk and Charlotte would disagree….

But what about putting people like Jacqui Smith in a house with people like
Peter Sutcliffe!!! Howzat for an idea? I think I will wrte a play about
it.

A lodging house. A bit like the one in Rising Damp ……….. and Peter
Sutcliffe lives in the basement …………… And Jacqui Smith lives in the attic
apartment ……………… And every morning she has to creep down two flights of stairs
to the front door – just begging God to keep her safe from Peter Sutcliffe who
at any moment could jump out from a darkened corner and stab her in her fat
little neck or gouge out one of her eye-balls and make her drink it in a
milk-shake …………… Ughhh! I am frightening myself here.

If President Obama can be pursuaded to carry on with the USA’s proposed
manned mission to Mars, Sutcliffe could train to be an astronaut instead of
going shopping. I’m sure he’d enjoy life on Mars.

Does it have to be a spare room at Buck House for Sutcliffe? Liz once had
that Fagin chap sitting on the end of her bed, didn’t she?

No: can’t Sutcliffe be allocated a room in Jacquie Smith’s sister’s house?
That might send Ms Smith back to her real home rather sharpish and then she
wouldn’t be able to claim all that extra wonga, at least until she’d moved
into a spare room at her other sister’s house. Just a thought.

Errrrr ………… Kittens! Just had a call off NASA …………. Aliens again! Will be
back later ………….. if Houston have resolved yesterday’s problems.

I wish they would find somebody else do this job! My cats are glowing in
the dark with all the contaminants I bring home day after day. And I have
grown an extra thumb during the night!

Saul!!! You simply have to be the best person for our Minister of
Solutions. Would you do us the honour of accepting this on behalf of the
Kitten Commentariat Party for me? I am sure that you will be well
received.

I feel that I may be seen as just a tad too radical at this point in my
life to take on this particular role.

Right, that’s it then. One of the spare bedrooms at Buck Palace for Mr
Sutcliffe.

Oh Blink!!! How fabulous to find somebody else who is as mad about this as
I am. If I see that pathetic, remorseful face of his one more time!!!

janes …………. Let us just hope he isn’t allowed to enter a stationers or a
hardware shop.

I seriously think that the World is on its head.

You wouldn’t believe the arguments that I get into in Real Life about
bringing back the birch and hanging.

Well, what do you know eh?

Isn’t this just another contravention of the code that talks of justice for
all. This is the guy who made the fuss about stopping the Dutch bloke’s entry
into the UK last week. Yesterday Straw talked about having to maintain cabinet
confidentiality as Justice Minister(hahaha). There’s allsorts to unpick in
this. The vehicle this unelected bastard crashed into was stationary having
already crashed. What the fuck was he looking at if he wasn’t texting? Oh, I
know, it was Christmas Day. There you have it. Charity for all on
christmas….is there anyone out there who might like to tail this shit of a
human being and just not see him on the road and inadvertently drive over him
in a 500ton steam roller thereby kinda squashing him into kingdom come? It’s
about time the nation rose up against these descendants of satan.

The judge would probably appoint Long John Silver to do the kicking.

He wants his arse kicking!

It was reported today that he is also likely to serve only 6 weeks of the
12 week stretch…..

NOW!!! Mmmmmm! Why did the Judge feel forced to have to make the point that
he was not actually texting at the time of this crash?

If he wasn’t doing it at the time of the crash it is not a contributing
factor unless the texts were pissing him off or getting him excited about
something ……………… Did he have tears in his eyes that blurred his vision? Did he
gain an erection that sprang from his pants and knocked his steering
wheel?

The very fact that it has been proven that he was sending and receiving
texts is utterly unbelievable.

In fact …………. I think we should bring back hanging for this type of
offence.

Every driver knows that in the blink of an eye the road conditions can
change and that we are in control of a terrific amount of horse-power. This
Lord-thing bloke creature was knowingly not in control of what constitutes a
lethal weapon.

So as far as I am concerned – although he didn’t intend to kill anybody –
he knew that he could have done.

He should be birched and lacerated, rolled in salt and then hung out to dry
over the Town Hall steps. And when he is dry …….. cut him down and birch hi
again.

I saw the victim’s cousins on the news earlier, saying that they would take
this to a Higher Court ………….. Let’s support them and hope they get there.

They looked so lost and lonely that even I had a very tearful lunch-time –
So God knows what they feel like!