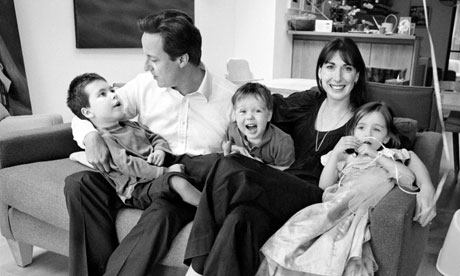 Ivan, who had severe epilepsy and cerebral palsy, was taken ill overnight and died in hospital this morning.

The sadness in the Cameron household this morning must be immense.

I am full of admiration for those households that manage to care for a child with Ivan’s needs, and to provide a normal happy home for other children at the same time; to have done so whilst the household was also under the strain of being the hub of a major political figure is an under recognised achievement for the Camerons.  I wish them well.

Janes ……………… Snap! He was just thinking how lucky he was to not have to
answer a lot of bloody awkward questions this week ……………. and about not
getting his arse kicked by Cameron again.

Coco: Gordie Bruney is an absolute bastard for burying all the bad news
under the weight of poor little Ivan

To make it more interesting they should resurrect Alec Dane with his
“Gong”, if a simple Yes or No is uttered in response to a question, Alec could
gong them out.

Bob Danvers-Walker could do the voice over for the BBC.

I think you may be putting too much stock into PMQ’s. The majority of
people see it just as a public schoolboy slanging match. All the shouting and
paper waving is seen as an embarassment outside the UK.
In the last 30
years how many questions have actually received a straight answer? It is just
silly political party line point scoring.
The result of the next GE will be
determined by whoever the Dirty Digger wants to see in power. Not by awkward
questions ducked by the present incumbent, watched by a very minority
audience.

Sauly! It was rather a stroke of luck for the old bastard wasn’t it!

Gordon Brown may well be guilty of political manoevering in other things,
but I doubt this is one of them.

……….. And I wonder if anybody was going to mention Lord Texter?

And that bloody Royal Family of ours? Especially the members who are
landing helicopters in the back gardens of their girl-friends without the
consent of the MOD!

I don’t know why I just don’t hang myself right now and go to my mansion in
the sky with God.

This Government will be the death of us all. We are doomed.

What is the point in promising us a Freedom of Information Act if we can’t
receive the bloody information that we want because it could threaten our
democracy? What fucking democracy? The UK is not a democracy. If it was
democratic we wouldn’t have a Knob-End like Lord Texter grabbing expenses at
the expense of ourselves.

It’s a bloody corrupt and scandalous nation that we behold. Scandalous I
say!

And buy the way -I think that the public purse is paying the Royals to use
public money to have accounts in the British Virgin Islands!

Please tell me I am wrong!!!

Gordie Bruney is an absolute bastard for burying all the bad news under the
weight of poor little Ivan’s passing away.

He must be feeling like the man who couldn’t be hung today!

How convenient for him that the Cameron’s tragic bereavement comes at a
time when we are told that they ain’t gonna tell us fuck all about what went
on at Guantanamo.

Same goes Gloria! I am so glad that I didn’t have children. I just would
not be able to cope with the loss.

I am still mourning my budgerigar Elvis who fell off his perch in 1982. I
can still hear him whistling the theme tune of Eastenders. Absolutely
tragic!

I still cannot believe the insensitivity of my Father who straight after
Elvis’ funeral in the back-garden gave me five pounds to go off into the
village to buy another one. As if he could ever be replaced!!!

I can only begin to imagine the anguish they are in. I am so sorry for
their loss.

Lots of sympathy to David Cameron and his family. He is a jolly good egg.

It’s so refreshing to see a politician that talks the talk and walks the
walk.

Maybe he can bring his own brand of traditional values to the slothful and
despicable masses of ill-bred Oicks that are currently ruining this bloody
country!

What a sad world we live in when it takes the death of a child to cancel
the weekly debacle that PMQ’s has become.