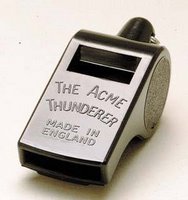 It has been a spectacular few weeks for that endangered species, the Whistleblower.

First up was Paul Moore, who had patiently bided his time and delivered a broadside under parliamentary privilege to the Commons Treasury Committee, securing not only the scalp of his former boss, Sir James Crosby, but delivering a nasty wound to the backside of the Prime Minister.

Then neighbours of âSecond Home Secrecyâ, Jacquie Smith, successfully twitched their curtains and blew the unwelcome wind of scrutiny by the toothless Parliamentary Standards Commissioner, John Lyon, up her skirt.

Yesterday, a Venezuelan financial analyst, Alex Dalmady, was revealed as the finger on the trigger which blasted Allen Stanfordâs billion dollar Ponzi scheme out of the water.

In all three cases there were highly paid professionals staffing regulatory agencies, respectively, the FSA, The Standards Commissioner and the Securities and Exchange Commission, which exist solely to uncover these scams. They are not required to prosecute scams, that is for the Police and FBI â their function is merely to use their âsuperiorâ knowledge and experience to notice when something is going wrong.

Yet all these scams would still have been firmly beneath the water line without the bravery and initiative of relative amateurs.

Hat tip to Cityunslicker who has added another twist to this tale; highlighting whistle blower Graham Milne of Lloydâs TSB, and the ironic detail that Carol Sergeant who was awarded the CBE and made a Trustee of the charity Public Concern at Work (motto: Making Whistle-Blowing Work) had previously been the Managing Director of the FSA that had dismissed Milneâs allegations â and subsequently became the Chief Risk Director at Milneâs old employersâ¦â¦.Lloydâs TSB.

âHM Revenue & Customs (is) investigating explosive allegations about
tax avoidance schemes operated by Barclays Bank, made by a whistleblower in
the firm and apparently substantiated by leaked documents. HMRCâs moves came
as the government announced steps to try to discourage tax avoidance by
Britainâs banks, now frequently dependent on state aid. The chancellor
launched plans for a code of practice in which banks would be expected to
abide by the âspirit of the lawâ. Darling said the government had taken action
against tax avoidance in every budget since 1997 but that, as soon as one
loophole was closed, another opened up. âPartly because the very complexity of
banking, the way in which, sometimes just investment banks and sometimes
others have sought to develop instruments in order to avoid pay taxes has in
itself posed a systemic threat to the system.â (from The Guardian website)

From the Daily Mail website:
âThe chancellor signalled last night that
another rescue package is on the way â to be paid for by tax rises and
spending cuts. Alistair Darling made it clear that a further boost was needed
to jolt the UK out of recession, despite a growing black hole in the public
finances.
But a report warned yesterday that tax income from the financial
sector is set to almost halve. The Centre for Economics and Business Research
warned that revenue from the City will be

âBarclays, the high street bank, is alleged to be making about

Room for one up top!

Thatâs like a Red Rag Trade to a bull market; still, thereâs Room at the
Top

Miriam Karlin and factories, everybody out!

Whistleblowing is to be made a criminal offence in the NewStassiâs upcoming
593rd Criminal Justice Bill this week. The Home Office is at pains to state
that it is concerned about the number of people in our great country,
increasing in recent times, that are not acting in the stateâs best interest.
Therefore, to make it very clear that the government will not tolerate such
behaviour new clauses have been added to the bill that will stop people having
an opinion other than that which is acceptable to government. As part of the
policeâs OpenMouth policy, people will be regulated in a small number of
offices and factories to trial the new regime. It is hoped the scme will be
ârolled outâ nationally by the end of next week.

No, I wonât bloominâ whistle a âappy tune âcos I ainât at all âappy. Iâm
sick to me liverish gills with it all. I donât think Iâll ever be able to
enjoy my kazoo again. (bang goes the national tissue-paper sales)

Does bravery and initiative mean the same as disgruntled and revenge
seeking?