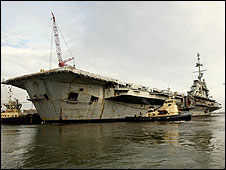 A former French aircraft carrier – rejected by India and Egypt as being too toxic to be broken up – has arrived at its final resting place in Teesside.

The vessel contains 700 tonnes of asbestos-contaminated materials and was recalled to France from India in 2006 amid concerns over its toxic elements.

Jean Kennedy, leader of the Friends of Hartlepool, a local community group which led the fight against the dumping said:

“Here was a ship laden with the worst possible toxins and they want to bring it to this country to get rid of it. We’ve now got a ticking, toxic time bomb and we’re going to live in a nightmare haze of toxicity for the rest of our lives. We live in a town where we’re breathing it every day of our lives.”

We’ve had Toxic assets from the West, Toxic rain from the East, Toxic waste from the South, and a Toxic Prime Minister from the North, how can plucky little Britain survive all this?

Which brings me back to ………… putting electric fencing along Hadrian’s Wall
and invite all the Scots to make a brand new Scotland on this side of it!

Then we can dump all the horrible people on the Scottish side …………… and
have one lovely big prison!

Plans are afoot to dump nuclear waste in Cornwall. As a rural, sparsely
populated area it would seem to be a good choice. As a region with more
frequent and stronger earthquakes than anywhere north of the Alps it probably
is not.

Sadly it is almost inevitable that Teesside has become a dumping
ground.