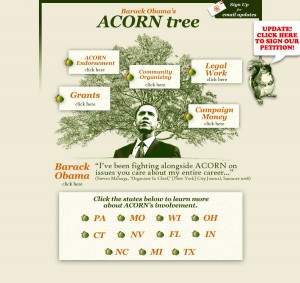 ACORN, the Association of Community Organizations for Reform Now, has become a household name in the US, but is relatively unknown in the UK.  Acorn’s roots are in the National Welfare Rights Organization, who believed they could use poor, unwed mothers to foment a revolution. The NWRO agitated for unlimited welfare benefits for those mothers and persuaded many urban politicians to loosen welfare eligibility requirements. This led to a doubling of the welfare roles and strained local budgets.

Acorn is the US equivalent of the Militant Tendency ’Looney Left’ with an agenda of anti-capitalism to match. Acorn’s tactics are famously confrontational. Their protesters have disrupted Federal Reserve hearings, but mostly deploy their aggressive tactics locally. Chicago is home to one of its strongest chapters, and Acorn has burst into a closed council meeting there. Acorn protesters in Baltimore disrupted a bankers’ dinner and sent four bus loads of profanity-screaming protesters outside the mayor’s house, terrifying his wife and kids. Even a Baltimore councillor who generally supports Acorn said their intimidation tactics had crossed the line. Acorn’s  determination is to take over the system is from within, rather than try to overthrow it from without.

What has Barack Obama got to do with all this? Obama’s early days as a ‘community organiser’ in Chicago were spent working closely along side this group. Some of his staunchest supporters – like Madeline Talbott, are key members of Acorn and campaigned extensively for Obama, but their track record in free and fair elections is not convincing. Because they are on the side of righteousness and justice, they aren’t especially fastidious about their methods. In 2006 they registered 1,800 new voters in Washington. The only trouble was, with the exception of six, all of the names submitted were fake. The secretary of state called it the ‘worst case of election fraud in our state’s history’.

What does Acorn have to do with the banking crisis? It was Acorn  in a complicated and long running campaign, proudly touted as affirmative action, which pressured banks to make sub-prime loans. Talbott, of the Chicago Acorn branch, who boasted of ‘dragging banks kicking and screaming’ into dubious loans.

So, Obama supported Acorn whilst they forced the banks to take on dubious loans, then Acorn supported Obama on his messianic progress to the White House, all very cosy; now the rest of the world is relying on Obama to sort out the banking crisis – how can he do that without alienating the very people who put him in power?

Obama is being abused and used like a sc*pe-goat!!!

But that’s what he is. A sc*pe-goat! ………….. He is being abused and shafted
……….. And because of a few architect designers he thinks he has won a victory
the poor bastard.

He can just do what most politicians do to the people who voted them
in……..