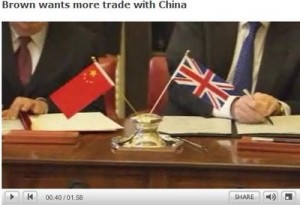 Old salts will recognise the signs immediately – our beloved leader sending out distress signals as the Good Ship Britannia staggers and wallows over onto her beam ends…..and no sign of the Captain being keel-hauled! – is it too much to ask of life that he should be hoist on his own petard and hung upside down from a flagpole? I never did much care for the cut of his jib.

A hat tip to the excellent Old Croydonian and my thanks for this picture of our proud ensign flying upside down, unnoticed by the land-lubbing politicians.

A link to a special glossary of ancient nautical terms HERE for our overseas readers!

Sorry, I missed all of the fun on the other thread…

Would you like a spoontje full of sugar in your kopje thee, then? I believe
it makes the medjecine go down marvellously well!

Then you’ll know why we all say pod stegs and understand why wicked,
loveable Smudd teased his lovely mum and why we all speak in a Dutch accent at
home; it means she’s still close to all our hearts. We do actually sing Dutch
folk songs at Christmas but none of us dares make Applecake these days – but
the tempex episode was so funny ..

When I was very little, we had my German grandmother living in. I can
assure you we had a very peculiar in-speak at home. It was a shock for me to
find out when going to school, that I was using many non-existing words.
Having grown up now [to use a euphemism] and working with an international
team of collaborators, I have big joy in using with them a strange mix of
mainly English, French and Dutch, resulting in such words like “spoontje”

for fear of repeating myself:

I had a feline you’d come up with something like that.

In my experience kittens speak Klingon, that is, everything they can get
their claws into.

Twiddles thumbs … tries to think of doggie puns … hums absent-mindedly ….
twiddles thumbs … wonders whether to claim that her kittens speak Catalan in
response to brilliant SpaniEL …. decides against it … grudgingly admits that
‘Scholl we dance’ was brilliant too …

It’s odd, then, that though Smuddy doesn’t actually speak Dutch, he does
speak almost all the time in a Dutch accent! He used to tease his lovely mum
by taking the mickey out of her accent and in fact we all pepper our
conversations with things like “pod stegs” (poached eggs) and “tempex”
(tent-pegs).

Good night Chatelaine ……….. Just catching up Kittens! What a day and a half
………. and don’t even know everything yet. I see Milly has been a Half-Wit.

Was just thinking on the way home ……….. I don’t think it’s healthy having
all these young men and ugly women in the UK and US Governments ………. Am I
wrong to think in this way?

Have I turned into my Mother?

Oh. I’ve just seen I typed ‘beeb’. Bugger. That isn’t what I meant to
type.

I’ll tell you exactly where it has led this evening, young man; I’ve been
attempting a complicated double-twixt-clog-over-flick-flack-with-sonorous
“Alto”embroidered-notes; that means I’ve beeb sight-reading musical form at
the same time as broadly interpreting some intricate wooden-sole work, so less
of your lip under these circumstances, laddie, if you please! I’ve a nasty
sprain now and some severe grazing about the swollen ankles; if you take into
account the persistent oedema, then I think you’ll agree I’m a sorry sort,
here on the floor … thank goodness those lovely Paramedics have brought their
winch. I’ll be back in my comfy chair in a matter of hours.xx

Well, I’ll get over it. Don’t worry. Will sleep on my dictionary and prints
from Google. Flip in some Wikipedia. Should do it. No problem.

Who knows where it could lead to.

You just caught the tail end of it.

You are a Wag! Keep littering this thread with Dog puns and it will have to
be impounded.

I’ll chew on it overnight Saul, I’m off to my basket now, been a long
day.

Just paws for thought. I’m sure you will come up with something.

There’s the tail end of something on the tip of my tongue, one of the
advantages of being a Bitch.

I have an English Espana cross…. it speaks SpaniEL

I think we’re all struck dumb Saul – difficult to follow such a class
act!

And .. my dogs speak Dutch [and French, English & Spanish]. No offense
meant

Your dogs speak Anglo-Saxon, I promise you.

As for her soft shoe shuffle in those clogs……..

However, his sister does speak some Dutch and on happier Christmases than
the one just endured, we have been known to gather round the piano after an
agreeable meal and some glasses of fizzy pop and belt out a few old Dutch folk
songs. I can’t vouch for my pronunciation, but my harmonies are spot-on.

Chatelaine – Old Smuddy’s mother was Dutch. I once asked him why he hadn’t
wanted to learn the language. He thought about it for a while and replied “Why
would I need to learn Dutch? How often do I need to speak to Belgians?”

I find your reply a bit late; ’twas deep down in the threads.
So you
speak no Dutch despite a Dutch grandmother?

It’s Fairy language Chatelaine. I speak Fairy!!! And a bit of English – I
can follow German and French when I am well.

Good morning.
Evelyn Waugh is not too difficult to follow, Coco

Gloria! ……… You do know that English is not my first language don’t you?!

I wonder sometimes if we put people off daring to post to us when they see
the way we talk to each other on here ……… It’s like a whole new language ……….
They must scratch their heads ………….

Good job Chatelaine is extra-multi-lingual ……… But I think she will have
learned another one if she stays with us! – Especially after our Troll episode
the other night!

And with that, I wish you all a good Evelyn.

A very good friend of mine told me that his late father was of the opinion
that what this country needed was another war. Only it turned out he meant
another Waugh. Make of that what you will.

It is frightening Jo ……….. I see Africa and Asia are not sent foodstuffs
and medical supplies. Western Governments protest that they don’t send the
supplies because the militants sequester them …………. But you and I know the
truth!

There is a major plan to reduce the number of people in countries that
cannot sustain themselves ……………… but no Government will admit it.

The druggy companies are at the helm of this destruction of humankind and
nobody will tell me any different until they nationalise the whole filthy
industry.

When patents run out ……… they are always renewed ……….. just under a
different name.

But I seriously believe that Wars are encouraged to wipe out the
populations of certain areas.

No…its all about THE crisis and me I am on the verge of a nervous breakdown
with all their lies,the global LIES

There
is a very good one,surely you know it? “hasta que se sepa la verdad”.(I was
not talking about that one tho”!)
Gone for a munch and an early night.I am
dead meat.
See you tomorrow

jajajajajaja I was on a spanish stooopid blog.What a non-level they”ve
got,honestly

Oh Jo! How I have missed you.

REVOLUTION NOW !!!
Thats what we need in the UkK and all over our
bleeding planet

Hang
on…I”ll put my “morgan coat” on
I will be off in 3 freaking days now.Just
on a course : how to kill bugs in poor countries and dig up hole to make wells
… as if they didnt know how to find it themselves…err…ooops!
Hey! by the
way,what did he do again,Mr.Bordon Grown? He is looking fatter by the day…yuk
the man yukyukyukyuk

Time for mutiny then!

Gordie’s beam wants kicking! We need a massive a re-shuffle of all the
Half-Wits he has in the Cabinet ………. And yes that includes Mandy, Milly and
that dreadful Jacqui Smith.

He needs to take a leaflet out of Obama’s book as from today and get the
experts and academics to run the country.

This is not a Labour Government!

Gordie has given us a taste of Fascism that even Hitler balked at!

Bugger off Gordie …………… and take that Sour-Puss of a wife with you!

I have nightmares about her ending up in some Governmental role.

I am shuddering even thinking about the shower of sh*te that are running
the country. No wonder the rest of the World hates us.

These people seem to have a flare for this sort of thing.

Sounds like someone’s in line for a good clipper round the ear.