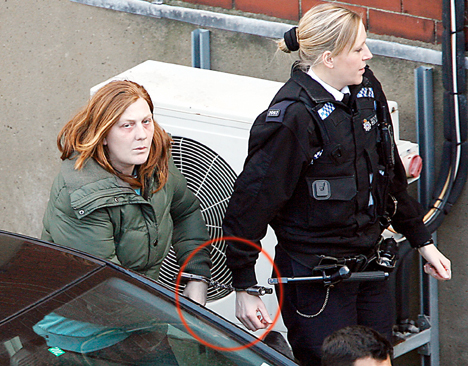 The mother of Shannon Matthews has been jailed for eight years for her role in the kidnap of her own daughter.

Her former partnerâs uncle, Michael Donovan, 40, was convicted of the same offences and was also jailed today for eight years.

Christ! I forgot about that! I did hide all the oranges though â¦â¦ and the
giant asparagus. I will just go and put a lock on the Sand M room as well. I
should have done that last week â¦â¦â¦.. before I had the WRVS round to tea â¦â¦.
They made a right bloody mess!

Stop and desist with this offer of red hot pokers up the arse. We will be
inundated with tory toffs.

I would bring back hanging for people who harm animals in any way. In fact
I would personally take full responsibility and I would not wear a mask. I
would ensure that the hangee was looking directly into my eyes as I let the
rope go.

But before anybody was hung I would personally sit there and do unto them
what they had done unto animals for three times longer than they had done it
to the animal. And possibly a hot poker up the arse would not go amiss.

At the risk of alienating myself and becoming the most unpopular poster on
here â¦â¦â¦. I would go as far as to say I would do the same thing to anybody who
practices ritual slaughter as well.

Having watched a tv programme where young children battered a goat to death
with small pebbles so that they could get the hang of how to kill animals for
supper â whilst their parents look on is not CULTURE!

It is not RELIGION either! It is barbaric and despicable â¦â¦â¦. And I hope
that the New World Order will bring all the peoples of all nations to boot
â¦â¦.. Even those who live in a time-warp in jungles around the World.

And if anybody wants to challenge these thoughts of mine â Do your worst!!!

And neither did you run a grooming salon called Pawside Parlour somewhere
in Pennsylvania where you pierced kittensâ ears with barbells and cut off the
blood supply to their tails with rubber bands until their kitty-tails fell off
and then advertised them on ebay as âgothic catsâ. (I canât seem to do links,
but if you google âgothic catsâ you will read in The Times Tribune and
elsewhere all about the fiendish couple who have been charged. On a happier
note you should also read that two cats and three kittens have been siezed by
rescuers.)

Yeugh. So, Coco â tell us now; what else didnât you do?

In this instance â¦â¦â¦. I reckon the Judge is not giving their brains and
minds enough credit.

Gutter-People and Scallies may not be wise and intelligent in the universal
sense â¦â¦â¦ but they are street-wise and have an innate sense of how to scam.

It did not take a lot of intelligence to work out that missing children are
sometimes equal to or synonymous with â¦â¦â¦ dosh! Especially given the way we
were saturated with all the news coverage of Madeleine McCannâs mysterious
disappearance and that fabulous fund. (Please note that I say âwereâ!)

For the first time in my life I wished that I had given birth to children
â¦â¦â¦ just so that I could have one kidnapped!
I wondered how lovely it would
be to sit on TV in a distressed state and wearing a pale silk peignoir â¦â¦â¦..
with make-up ladies dabbing at my weeping eyes and tweaking at my hair.

I would have loved for GMTV to collect me in a limousine and whisk me over
to the studios â so that a news presenter like Fiona Philips would share my
pain and make sweet cooing noises about how she would help me all she
could.

I would have loved to have been loaned the use of a private jet and to have
had all the superb treatment from the UK Embassy â with Ambassadors jumping up
and down for me and making phone calls with the Prime Minister â and all my
family gathered around me in a quiet sleepy luxury resort â eating
child-friendly toppings and sucking on lollipops â¦â¦â¦.. And doing crazy dances
in front of police officers â just so that people would wonder if I was a
Mason â And jogging and playing tennis and having a few months off work! â¦â¦..
Oh! And to have been granted a place at the Vatican â¦â¦â¦

But anyway â¦â¦â¦.. I didnât have any kids â¦â¦.. so I couldnât pretend to have
had one kidnapped â so I didnât get the Press coverage or any money and I
didnât meet my favourite pop-stars and film stars â¦â¦â¦ But I understand where
the Matthews Scummy Mummy was coming from.

The judge, Mr Justice McCombe, told the pair: âThe offences that you
committed were truly despicable.

âIt is impossible to conceive how you could have found it in you to put
this young girl through the ordeal that you inflicted upon her.

âIt is incomprehensible that you could have permitted your friends,
neighbours and in your case, Matthews, even your children to sacrifice time
and energy in extensive searches for the supposedly missing child.â

However, Mr Justice McCombe added that he did not think Matthews and
Donovan could have planned and carried out the kidnap without other
people.

He said: âIt is argued for both that they were not of sufficient
intelligence to conceive and implement this plan without the involvement of
others.â

Reporting from Leeds Crowd Court, Gerard Tubb said: âThe headline of what
happened in court today were those people who were not there.

âThey were mentioned by everyone, including the judge.

âSo who are the others, where are they and why arenât they being
prosecuted?â