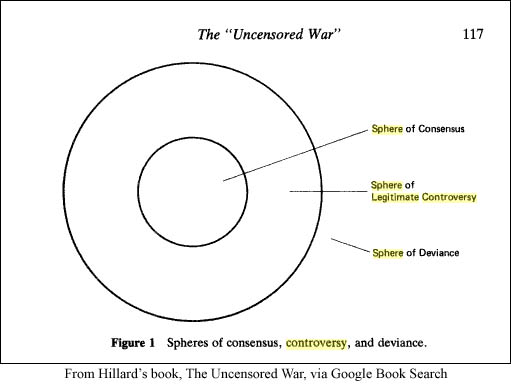 Jay Rosen, a man who had a brief career as a journalist that he wisely curtailed with a decision to study in depth the far more interesting rise of citizen journalism and blogging, has penned an interesting academic article HERE on a matter dear to the heart of all those who closely follow the McCann saga, indeed all those who despair of the standard of reportage in the main stream media.

Why is it that the UK press have failed to apply any analysis to the known facts and continue to trot out a peculiarly one sided version of those known facts?

Rosen’s theory is based on this diagram from a 1986 book by Daniel Hallin –The Uncensored War  -It describes three concentric rings.

The inner circle, described as the Sphere of Consensus, is a safe haven for journalists and the press in general. Statements made here are believed to be self evidently true, uncontroversial. ‘Children should be protected’, ‘the welfare state has improved life in Britain’, ‘democracy is the ideal state’. An academic would say that these statements are loaded with Western values, and this is the point at which journalists enter the political debate, for they are inherently upholding Western values. To say that Mohammed’s marriage to a nine year old girl represents child abuse is to uphold Western values, not an absolute truism, but within the Sphere of Consensus for journalists in the Western Hemisphere.

The next circle is described as the Sphere of Legitimate Controversy. Hallin says “This is the region of electoral contests and legislative debates, of issues recognized as such by the major established actors of the […] political process.” It is not the general public who decides what these issues are, note, it is the major established actors. The Politicians,  Newspaper editors, and TV producers. Here the two-party system reigns, and the news agenda is what the people in power are likely to have on theiragenda.

The outer circles, the Sphere of Deviance, Rosen quotes Hallin, we find “political actors and views which journalists and the political mainstream of society reject as unworthy of being heard.” As in the sphere of consensus, neutrality isn’t the watchword here; journalists maintain order by either keeping the deviant out of the news entirely or identifying it within the news frame as unacceptable, radical, or just plain impossible. The press “plays the role of exposing, condemning, or excluding from the public agenda” the deviant view, “marks out and defends the limits of acceptable political conduct.”

Most journalists would be horrified to hear themselves described as political animals, but deciding what does and does not legitimately belong within the national debate is a political act. Journalists like to think of themselves as ‘insiders’, to believe that they are bringing you, the reader, the inside story. They are, they are bringing you, the reader, the story as it is seen by the true ‘insiders’, the major established actors, the politicians, the newspaper editors. It is a pact with the devil, for they can not break the umbilical cord which binds them to their ‘inside track’ – if they do so, they will quickly find themselves with no story, no job even.

In recent years, blogging on the Internet has radically changed this landscape. whereas before the public were connected to the main stream media, but not each other, citizen journalism has connected the previously pliant readers to each other. Communities such as Three Arguidos have formed around single interests, and wonder why the main stream media fail to follow their interests. The answer is simple, they cannot, they never have followed the interests of the general public, they publicise the interests of the main political actors.

However, there has appeared on the horizon several deviant journalists, such as Guido Fawkes; far from furthering the aims of the main stream actors, he positively revels in failing to follow their agenda. Some of the main stream actors are slowly moving away from their static position of denigrating and excluding the bloggers and internet communities as deviant; Barrack Obama’s phenomenal fund raising programme was as a direct result of harnessing the power of the Internet.

We do not have ‘central elections’ in the UK; we elect local representatives. Thus there is no incentive to harness the power of strong communities such as Three Arguidos, the individual players in these communities represent scattered votes. When those communities become a strong ‘block vote’ in individual elections, then you will see the main stream media reflecting their interests.

…… And if the Bloggers form their own circle …… which they already have …….
and become a spherical mass of applied internal pressure …… wherein the
increasing volume of its finite capacity can no longer be tolerated …… the
Establishment will give it a prick from the outside!

The outsider doing the pricking would be somebody not a million miles from
or unlike Jacqui Schmitzenburger ……..

But I believe that before the is allowed to burst ……. the plug will be
pulled on the internet.

This book about blogging looks quite interesting Handbook
for bloggers and cyber-dissidents, especially for would-be bloggers
starting.